What a story! What power! What magnificent singing and acting and one of the most dramatic scores in opera. Then we had murder, torture, rape and suicide for good measure. There’s no doubt Opera Queensland’s Tosca had everything and it was brilliantly revealed on opening night. What has been described as the greatest opera of them all – or equally, a simple melodrama – was turned into a gripping power-play between good and evil and a well-matched trio of ill-fated rivals. It was a sublime night at the opera.

The characterisations were well defined and the stage chemistry magical. 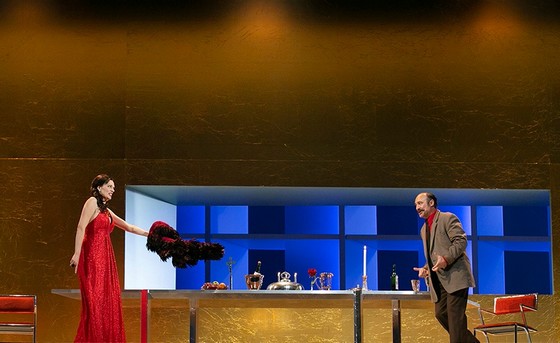 The action opened with Cesare Angelotti, sung by Sam Hartley, an escaped political prisoner, neatly dressed in an orange, prison issue jump suit, running into the church and hiding in the Attavanti private chapel. Cavaradossi arrived to continue work on his picture of Mary Magdalene. Angelotti emerged and told Cavaradossi, an old friend, that he is being pursued by Scarpia, the Chief of Police. Cavaradossi promises to help him. And so the descent into intrigue, deception and pursuit begins.

The opera was originally set in Rome in 1800, a time of upheaval and Napoleonic conquest. Patrick Nolan has updated it to the 70s, which was also a time of unrest in Italy. It was staged on Dale Ferguson’s double-decker modular set that converted sweetly from church to opulent apartment and flouro-lit jail cell, and his costuming was character-based in 70s style. I loved the dark leather gloves and black skivvy that personified the coldness and evil of Jose Carbo’s Scarpia.

His was a terrifying portrayal of a man without soul or conscience. He just radiated evil and his duets with the diva Tosca, who looked very trendy in red, high-waisted flares and fur coat, sung by the amazing Rachelle Durkin were electrifying and terrifying at the same time. The duets between Tosca and her lover, the painter Cavaradossi, were moments of pure joy and passion. Angus Wood sang Cavaradossi with such clarity and power his voice soared over the audience.

A sweet opening to Act Three saw Jessica Low as an office cleaner singing the Shepherd’s Song. The three-acter had a break after the first act of 45 minutes and the second two went through uninterrupted and at such a cracking pace of intensity that the time just flew by. 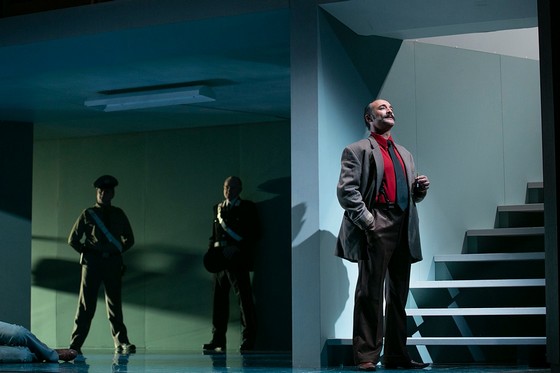 But all this would mean nothing without the music, which is one of Puccini’s most dramatic and descriptive scores. The Queensland Symphony Orchestra again showed its depth of talent with a brilliant interpretation under the baton of Oliver von Dohnányi and of course we heard the sounds of the wonderful Opera Queensland Chorus and the extra voices of the Opera Queensland Children’s Chorus.

Tosca is fascinating, well-produced journey into the dark world of repressive administrations that leaves an uneasy feeling even today.

Opera Queensland’s production of Tosca by Giacomo Puccini is on at the Lyric Theatre, QPAC, Brisbane until 22 June 2019. Bookings: www.qpac.com.au or phone 136 246. Sung in Italian with English surtitles.