It is timely, of course, reading a novel about an airborne illness that necessitates changes in human behaviours in order to reduce its deadly impact upon a population.  The Pull of the Stars is set over a three day period, sharply focused on one woman’s battle to keep her head about water as she cares for her maternity patients during the 1918 Dublin ‘spanish flu’ outbreak. 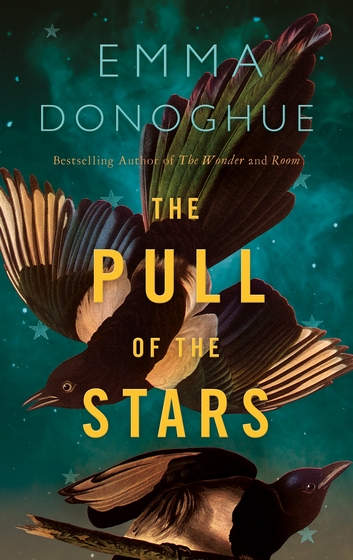 Julia Powers is a nurse, and she knows full well the effects that ‘the grip’ has upon those it targets. She has survived a bout of it herself.  As more and more of her hospital is turned over to the management of flu cases, Nurse Powers must make the best of what she has at hand, which isn’t much at all.  One cramped and re-purposed room, rapidly dwindling supplies and three heavily pregnant women in her ‘ward’ who all are experiencing the grip brings Powers a promotion of sorts. The sick and vulnerable mothers to be continue to be wheelchaired in, one after the other.  Its only death or recovery from the flu that will release the mothers from Power’s ward, and the fate of their newborns is another concern entirely.

Doctor Kathleen Lyn is a revolutionary, practicing in an age where few women are permitted to enter the world of medicine. A lifeline to the struggling Nurse Powers, Dr Lyn has big plans for Dublin, and these dreams of accessible health care are relayed to Nurse Powers over the course of their three tumultuous days together at the embattled hospital.

Considering herself more fortunate than most, Nurse Powers has a brother at home to return to and is not living in the dire conditions of which most of her patients must endure.  Finding herself the sole attendee to three labouring women, Nurse Powers is assigned a volunteer, young Bridie Sweeney.  Bridie is an absolute find; a quick learner in possession of a kind heart, an inquiring mind and a gentle hand.  It puzzles Powers that Bridie seems to know so little about the world, and it puzzles Bridie that Nurse Powers knows so little about how the world really works for those in the ‘pipe’ – unwanted children who grow up in care and have no benevolent eye guiding them to any kind of hopeful future.

If this author’s name rings a bell with you, it will most likely because of Donoghue’s 2010 novel, Room. Room was one of those books that many readers have said can only be read once, for the reason that the heart can only take so much pain.  (I’ve never been able to face reading this book about a child raised with his mother in captivity – I know my limits).

The Pull of the Stars is written only from the viewpoint of Nurse Powers, and there is no helpful punctuation with which to assist the reader.  It’s more a stream of consciousness, the observations of Powers relayed in real time as she struggles to keep up a reasonable level of care for her charges, whilst also rejoicing that she has found such a friend in the mysterious Bridie Sweeney.  The style of writing is both a hindrance and a help, and so it may deter readers that struggle to invest in novels written in such a manner.  It’s a curious way to write an entire novel but it works; creating an compelling work of such beauty and intensity that it hot houses the experiences of one to reflect the suffering of so many.

It is fascinating to read of what was considered useful to assist birthing women of that era.  The methods used range from the misguided to charnel house horrific (imagine getting out a hacksaw to saw into the pelvis of a woman in labour) and over the course of three days, Nurse Powers challenges and stoically performs the many small assistances and practices, many of which have dubiously survived and continue to be practiced upon our most vulnerable.

The inadequacies and the inequalities of the age drive Nurse Powers throughout the novel and it is upon this that we are educated; how truly difficult it was to be a healthcare worker during a pandemic in such a poor and under siege European city.  One of many cities, at that.

Previous works of Irish author Emma Donoghue have been shortlisted for both the Booker and Orange Prizes.

The Pull of the Stars is published by Pan Macmillan Australia.