The Little Things is definitely not the movie I was expecting from director John Lee Hancock. After all, when you’ve got The Blind Side, Saving Mr Banks and The Founder on your resume, you might feel a little typecast. But Hancock breaks the mould here with a gritty crime thriller. And more than that, he takes what could have been a mundane police procedural and spins it in unexpected directions. 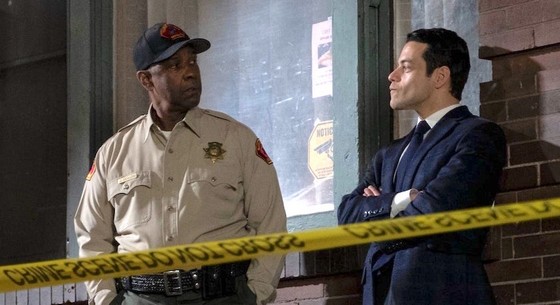 The brief version of the plot is that two mismatched cops have to work together to catch a serial killer. If you just said, “sounds a lot like Se7en”, you’d be right – to a point. While The Little Things starts off down a familiar road, it detours into something very different in the third act. Without giving anything away, don’t expect a neat resolution that explains everything. Hancock (who also wrote the script) subverts the genre rules just enough to make this a surprising addition to the canon.

It starts with a seemingly routine assignment. Deputy Joe “Deke” Deacon (Denzel Washington) heads from rural Kern County to nearby Los Angeles to pick up some evidence. The job takes him back to his old stomping ground – and a case that still haunts him. In the city, he meets rising LAPD detective Jim Baxter (Rami Malek). They get off on the wrong foot, but after a little digging, Baxter realises old hand Deke might have something to offer in a perplexing investigation. A mysterious man has terrorised a young woman on the highway. But the case soon escalates when another young woman is found dead. Some of the “little things” about the crime scene lead Deke to believe the killer could be the same man who committed the crime he investigated years ago.

A paper trail involving a broken fridge gives Deke and Baxter a potential breakthrough. They soon hone in on Albert Sparma (Jared Leto), one of the employees of an appliance repair business called to fix the fridge. When Sparma discovers Deke snooping around his car, he begins a cat-and-mouse game. He focuses particularly on Baxter. But is Sparma a cold-blooded killer, or just a crackpot who fancies he can outwit the cops?

The Little Things sits neatly in the long line of L.A.-set crime stories that stretches back to The Maltese Falcon and includes classics like Chinatown. And while this isn’t up there with those films, it’s certainly a cut above the everyday. Hancock stays well away from the glitz of Beverly Hills. His characters inhabit a grimy, dangerous world on the fringes of polite society.

With three Oscar winners in the cast, you’d expect the acting to be good – and it is. Denzel Washington plays somewhat against type here. He substitutes an almost shy uncertainty for his usual swagger as the damaged Deke. Jared Leto (Blade Runner 2049) scored a Golden Globe nomination for his uncannily creepy turn as Sparma. But the film really revolves around Rami Malek (Bohemian Rhapsody) as the over-confident Baxter; and he doesn’t disappoint. Look out too for Natalie Morales (Dead to Me) in relatively rare dramatic role as one of Baxter’s detectives.

Although I didn’t really know what to expect going in, The Little Things surprised me. This is an enthralling, if grim, police procedural that goes to some really interesting places.