Apart from some exaggerated teeth, Bohemian Rhapsody is an absorbing biopic of a man, his music and a complicated life. That man is of course Freddie Mercury, a supremely talented show pony. He fronted one of the most successful rock bands of all time in Queen and the film’s title is highly appropriate for what I regard as one of the finest pieces of music ever conceived. 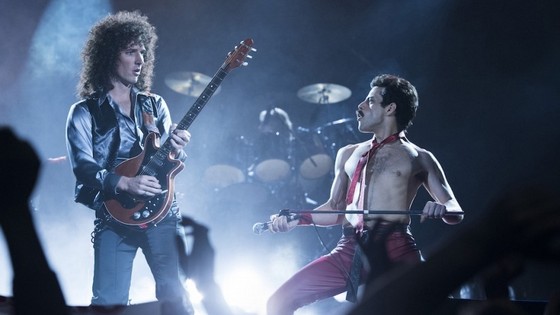 Though I knew Queen’s music, I didn’t know the story of Mercury or the band, so the movie was quite an insight for me. It was fascinating, and highly entertaining.

The picture starts and ends with Queen’s iconic Live Aid performance. One of the most important cultural events of the time, Live Aid brought together the world’s biggest musical names for a benefit concert in 1985. Organised by Bob Geldof and Midge Ure to raise funds for famine-stricken Ethiopia, the concert was one of the largest satellite link-ups and TV broadcasts of all time. It was watched by 1.9 billion people in 150 countries.

You get the impression from Bohemian Rhapsody that in spite of Mercury’s strong self-belief, he was forever trying to prove himself. His relationship with his fiancé Mary Austin (Lucy Boynton) was complicated by his growing awareness of his sexual leaning towards men … and yet, according to this representation, she remained one of the two loves of his life.

Rami Malek (Mr Robot), complete with disastrous buck teeth, impresses with his representation of the troubled singer. Gwilym Lee (Jamestown) for all the world looks like the group’s actual lead guitarist Brian May.

Much of the story is a classic music industry rags-to-riches tale. It features tropes including conflict between band members and those looking to exploit them, overindulgence and a price to pay. The grand scale concert footage however is impossible to ignore and leaves a lasting impression. As for the music, I never grow tired of it. Bryan Singer (The Usual Suspects) directs from a script by Anthony McCarten (The Theory of Everything).

Bohemian Rhapsody held my interest throughout.