With stone fruit now on sale and schools this week farewelling their Senior students, it is clear that summer holidays are but a whisper away. For many in this COVID-19 year, Christmas holidays will mean a road trip to a regional destination, which makes Queensland Theatre’s world premiere production, The Holidays (which was postponed due to the pandemic) now particularly timely. And as the show begins with Dad Bob Holiday (Bryan Probets), his wife Summer (Louise Brehmer) and their son Oliver (Matthew Ianna in a Queensland Theatre debut) embarking upon a hours and hours journey to the beach house of Bob’s unseen eccentric artist father, we are reminded of our own similar summer road-trip experiences, thanks to its Aussie music soundtrack of Chisel and Australian Crawl et al that serves as a through-line from even the pre-show ambiance within the Bille Brown Studio. 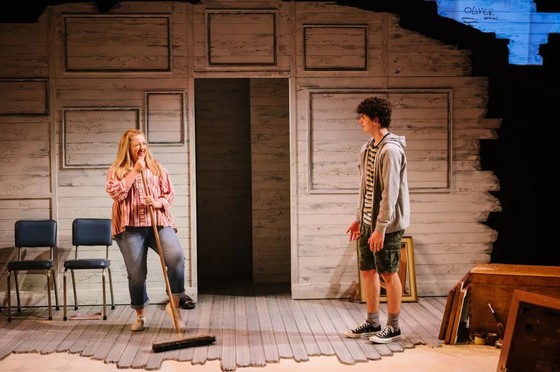 What the work also captures is the meander of a leisurely long summer day. Laidback pacing means that while there are hints as to the reasoning behind the trip and the notable absence of Bob’s father from the scene, we are a frustrating two thirds of the way into the 80-minute work before any specifics are revealed. On its own, this could serve as a hindrance to audience engagement, however, storytelling is supported by innovative sound and audio-visual elements that balance the lack of action on-stage once the Holidays arrive at their unspecified Queensland beachside town.

The beach represents an escape for Oliver and all he wants to do is spend time there. When he does, he speaks directly to the audience, who are transported along with him, in a literally wave of sight and sound courtesy of an all-Queensland creative team. Nathan Sibthorpe’s stunning AV projections create a sense of immersion, not only taking the audience to the beach, in work with Sean Foran and Matthew Erskine’s composition and sound design, but elevating on stage action by illuminating it on screen, showing the canvases of artworks being discovered by Oliver as he searches through the mysteries of his grandfather’s seaside shack.

As the story is told through almost-teenager Oliver’s eyes, his parents are not entirely likeable in their constant dismissal of his attempts at communication, clarification and recognition, however, in Probets’ and Brehmer’s hands the characters are given more depth than this just this reading. Probets’ restraint appropriately conveys stern Dad Bob’s complexity and burdensome struggle with becoming engulfed by grief while still fathering within his own family. And Brehmer is a bright as her character, Summer Holiday, as she attempts to support her husband and buoyant her boy.

The standout, however, is Ianna. The newcomer is incredibly talented and easily holds audience command as he breaks the fourth wall for direct address and share of this thoughts and feelings, and guides us through assistance in building his imaginative world through restrained moments of audience participation. He captures Oliver’s feelings of being lost and confused as a consequence of his parents’ attempts to protect him from their family’s reality, however, without any dialogue nod as to his exact age, it is difficult to fully appreciate his turmoil. 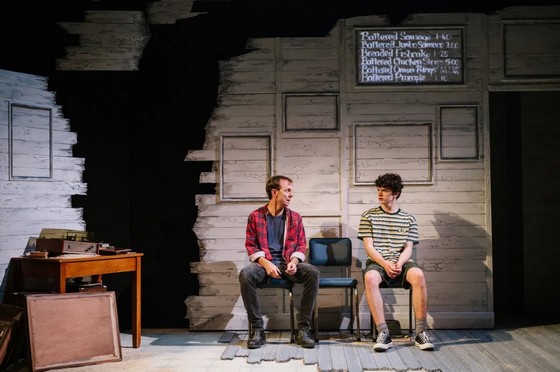 The 2019 Queensland Premier’s Drama Prize winner is a tender and hopeful exploration of family relationships and associated notions of connection, memory and legacy. David Megarrity’s writing skilfully take us from the frivolity and humour of dad jokes, mum dances and a pack of puns to foreshadowed poignancy associated with big and deep subject matter. Laidback disposition aside, The Holidays is a beautiful play in its account of relationships between a father, son and grandfather and its later scenes are particularly moving as Megarrity draws its strings together in a one-dialogue-line bow to bring tears to many eyes. Indeed, the charming, simple story of real people and their relationships ensures The Holidays its own legacy… for *shore*.