The Babysitter: Killer Queen is a hybrid of gory horror, coming-of-age tale and black comedy. It’s the sequel to 2017’s cult favourite The Babysitter. In that film, teen Cole (Judah Lewis) discovered his babysitter was involved in a satanic blood cult. 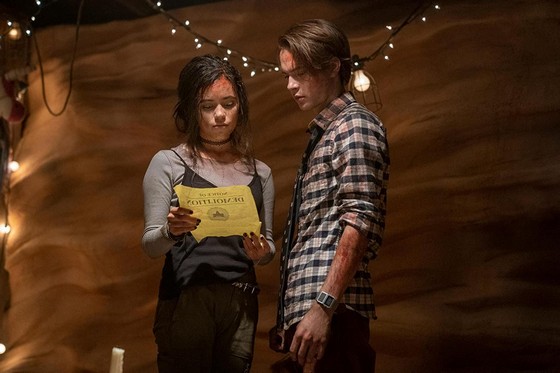 Two years after the events of that film the angst-ridden Cole is still traumatised, as no one believes his story, and he is a bit of an outcast in school. Heavily medicated he is seeing a school counsellor every day, and his concerned helicopter parents are enrolling him in a psychiatric academy in a misguided attempt to help him overcome his problems. He is invited on a weekend getaway to a nearby lake by his beautiful next-door neighbour Melanie (Emily Alyn Lind), who seems to be the only person who believes his incredible story. The trip is supposed to help Cole forget his traumatic encounter. They are accompanied by her friends Diego (Juliocesar Chavez), Jimmy (Maximilian Acevedo) and Boom Boom (Jennifer Foster).

But the trip is actually a trap for Cole, as Melanie reveals that she in also involved in the same cult and needs to drain his virginal blood and complete a satanic ritual to fulfill her needs. Max (Robbie Amell), Sonya (Hanna Mae Lee), Allyson (Bella Thorne) and John (Andrew Bachelor) – the cult members Cole managed to kill in the original film – are somehow resurrected and also turn up to exact revenge on Cole. Phoebe (Jenna Ortega), the rebellious but resourceful new girl in school, rescues Cole. This sets in motion a frantic chase as the pair fight for their lives against demonic forces.

The script from first time feature writers Dan Lagan (Zach Stone Is Gonna Be Famous), Brad Morris and Jimmy Warden taps into the usual tropes of the teen-horror genre, and is liberally sprinkled with pop cultural references and clever homages to other classic films. As is often quite common with these teen films, what the kids are studying at school foreshadows what is to come – in this case they are studying Faust and his pact with the devil. The blood-spattered grisly deaths – a series of decapitations and exploding heads – are mainly played for comic effect and uneasy laughs. The special effects are reminiscent of many of those B-grade splatter flicks from the 80s.

The fact that many of the original cast and creative personnel return for this sequel adds to a consistent tone, although the character of Melanie has undergone a dramatic change. Lewis (who played Jake Gyllenhaal’s son in the 2015 drama Demolition) is good as the nerdy Cole. Ortega (Jane the Virgin) brings a sassy kick-ass quality to her performance here which is a far cry from her work with Disney. And Ken Marino (Veronica Mars) is solid as Cole’s well meaning but clueless father Archie.

The Babysitter: Killer Queen is a deliberate throwback to the cheesy splatter movies of the 80s and 90s; it is something of a guilty pleasure and will mainly appeal to those who found much to enjoy in the original film.

The Babysitter: Killer Queen is now streaming on Netflix