If tables could talk, I think most of us would want them to shut up pretty quickly. They just sit there watching, year after year, recording all the great events that take place around them, on them and, apparently, under them.

In Tanya Ronder’s Table, secrets of the Best family are aired publicly and without censorship. The dining table is the unspoken star of this play. It’s a strong, solid timber structure with sturdy sides and a decorative motif atop each leg. It would seat eight people comfortably, but comfort is not what it was designed for, as each generation of the Best family leave a little bit of their soul in its grain. 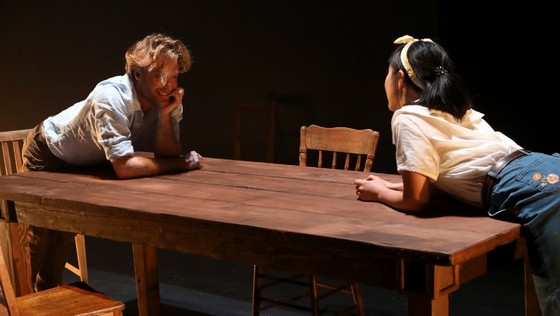 The maker of this family centrepiece is David Best (Brendan Miles). He has made it to coincide with his new life with bride Elizabeth (Stacey Duckworth) in the late 1890’s but is unaware of just how valuable an heirloom it will become over the next five generations.

Like the painting in The Picture of Dorian Gray, the table becomes the unwitting recipient of accidental and deliberate transgressions by the family members, mirroring their lives with its own scars. One of the first is a burn mark from a hot pot placed on the table. Over decades, there will be scratches large and small, knife scrapes, lion claw marks and the obligatory carvings of initials. But by the end, we find that time has healed all wounds, or as second-generation Finley Best (Mathew Lee) prophetically claims, “Wood kills bacteria”. However, the blemishes left on the surface of the table belie the hidden truths occurring in the real lives of the Best family.

How this story unfolds is a credit to the directorship of Kim Hardwick. With a blank, stark stage and chairs as props, Kim moves us to different times and places, without chronological order, seamlessly. Mystical lighting effects from Martin Kinnane and a haunting, wistful composition from Nate Edmondson created the appropriate mood. The simulation of a lion encounter was quite breathtaking.

The nine actors play twenty-three characters between them, so the pace is hectic but not dizzying. Notable were Stacey Duckworth as Elizabeth/Sarah, Julian Garner as Jack/Gideon, Danielle King as Michelle/Mother Superior/Barbara and Nicole Pingon as Su-Lin/Sister Ruth/Jess. Fine performances also came from Chantelle Jamieson, Mathew Lee, Brendan Miles, Annie Stafford and Charles Upton. 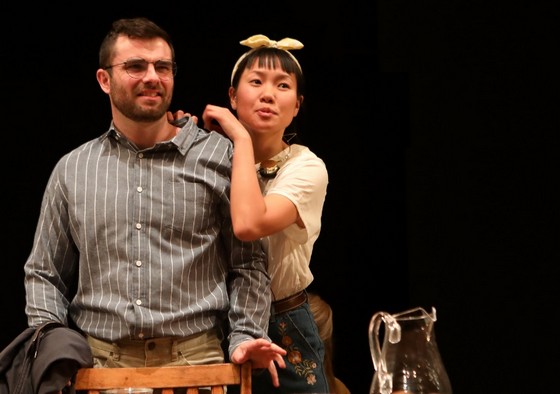 Many humorous moments punctuate the play; especially when the nuns in Tanzania come in close contact with a spider. Gideon’s 13th birthday is a great coming-of-age scene. And, as the corpse of patriarch David Best lies still, poignancy reigns. In Act 2, the drama elevates several notches as Gideon Best confronts estranged wife Michelle. Central to all these scenes is the table. If nothing else, it is the one constant source of strength in this tale of errors, mistakes and regrets.

Table is an experience well worth enjoying. Even if you prefer the flat pack from IKEA over the antique variety, you’ll never judge a table quite the same again. And look out for the recurring theme of Amor Patris: ‘the love of the father’.