Colin Thiele’s cherished 1964 novel Storm Boy is part of Australian folklore. The poignant story is of 11-year-old Mike, the titular Storm Boy (Conor Lowe) – named after being seen wandering the Coorong dunes during a dangerous storm – and his gruff reclusive hermit father, ‘Hideaway’ Tom (John Batchelor). Their lives are altered when Storm Boy befriends Fingerbone Bill (Tony Briggs) and adopts a family of orphaned (by hunters) pelicans. So sentimental is it to those of a certain vintage that there some opening night audience members wiping away anticipatory tears from even the very first appearance of the baby pelican trio: Mr Proud, Mr Ponder and the iconic Mr Percival. 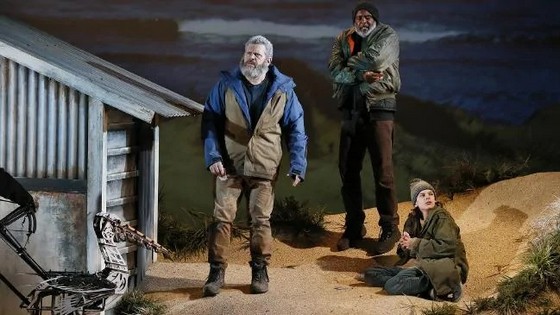 Transferring the classic story to stage comes with its limitations, none more so that of its animal characters. The puppetry (puppet designer and associate director David Morton) used for animals from cheeky fairy penguins to majestic full-flight pelicans is of the brilliance once has come to associate with Dead Puppet Society, however, their mechanical realisation makes engagement difficult … until the grown pelicans take flight (puppeteers Ellen Bailey, Emily Burton and Drew Wilson) From then, the story is enlivened. It’s engrossing to watch, which only adds weight the emotional wallop to follow in its later truly beautiful moments between the boy and his most beloved pelican, Mr Percival and his puppeteer.

The visuals of the landmark 1976 film are recreated through cinematic video projections, which serve to capture the isolation of South Australia’s remote sea and wetland region, but they do slow things down in interruption to the story by the associated screen lowering and raising (and also set changes). Indeed, there’s not a lot to the short children’s novella on which the work is based. So its realisation – even in only an 85-minute production – feels like slow theatre, if slow theatre is a thing like slow television, only without the marathon time commitment. A shorter running time like the 2013 Sydney Theatre Company production would have made for a tighter experience. The wild, windswept dunes, however, are given a nice intimacy in the beachside shack set, enhanced by Darrin Verhagen’s gentle sound design and compositions.

Strong performances emerge despite the limited opportunities; these are men who live in isolation for a reason, unused to unnecessary talk, especially of the emotional sort. Conor Lowe effectively conveys a range of emotions as Storm Boy and is most impressive in the pathos he brings to the relationship between the boy and the pelicans. 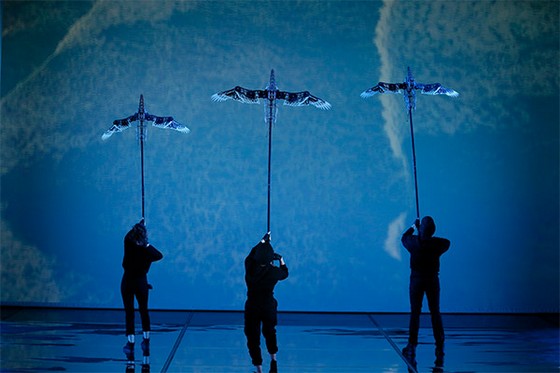 Queensland Theatre’s Storm Boy is a gentle heart-warming story. The consistency in its tone creates a thoughtful experience, punctuated by verbal and slapstick humour for young and older audience members alike. Cinematic extravagances aside, the production doesn’t take unnecessary liberties with the text, but rather embraces the opportunity to tell a humble tale well. As such, it offers a chance for nostalgic, emotional reconnection, but also introduction of the story to a new generation perhaps unused to a simple but powerful narrative told without resort to hyper-real realisation.

Storm Boy is playing at the Playhouse, QPAC until 17 August 2019.