Slapstick humour and pantomime feature in MTC’s version of Shakespeare in Love. Adapted for the stage by Lee Hall, with music by Paddy Cunneen, this Australian premiere is based on the 1998 film of the same name. More specifically, it’s based Marc Norman and Tom Stoppard’s screenplay for that movie. In the MTC’s production, laughs abound. It seemed to me it wasn’t just the audience enjoying itself; as the actors, too, appeared to be having a wow of a time. 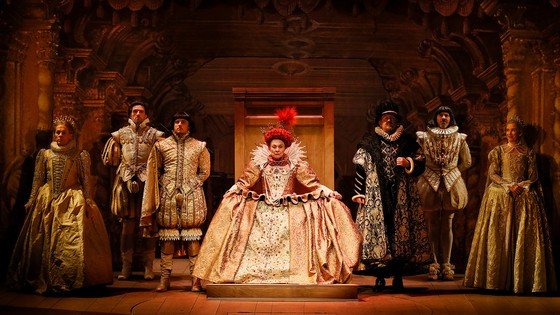 This is a tale of writer’s block undone by a passionate love affair that can’t go anywhere. Those circumstances lead William Shakespeare (Michael Wahr) to craft Romeo and Juliet. We’re in London in 1593. Viola de Lesseps (Claire van der Boom), the daughter of a wealthy merchant, is keen to take to the stage, but women aren’t allowed to be actors. She disguises herself as a man named Thomas Kent and auditions for a new Shakespeare play, impressing the great man with her performance. By the time Shakespeare discovers the ruse, the pair are hopelessly in love, but there are problems aplenty to do with both the staging of the play and their relationship. Viola is already promised to a pompous, impoverished aristocrat, Lord Wessex (Daniel Frederiksen), who is gunning for Shakespeare.

Comedian WC Fields said “never work with children or animals”. Well there are no kids in this production, but there is a cute much-referenced terrier who refused to cooperate on the night. Mind you, it didn’t matter  because the crowd loved the disobedience as much as the pooch’s antics. In fact, I could have done with more doggie appearances.

The two leads quickly make their presence felt. Michael Wahr is charismatic as Shakespeare; while Claire van der Boom displays a refined strength of purpose and intent as his muse Viola. Luke Arnold is cavalier as Shakespeare’s good friend and fellow playwright Kit Marlowe. Deidre Rubenstein lays down the law and shows she is not to be messed with in her role as the Queen, who likes a good night at the theatre as long as there is a dog involved. Daniel Frederiksen has no trouble showing just how arrogant Lord Wessex is. I felt like hissing every time he appeared.

The costumes are sumptuous – works of art in and of themselves. The wooden set, complete with mini revolving stage and turret, has immediate impact. The set and costume designer is Gabriela Tylesova. 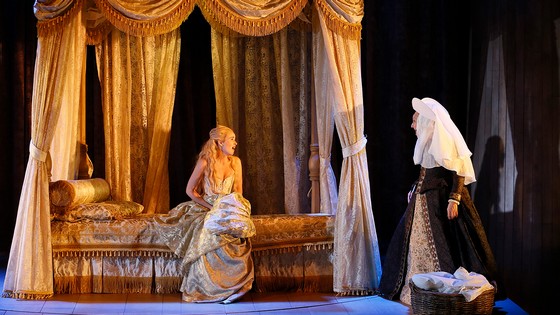 MTC’s Shakespeare in Love is what I’d describe as clever-silly in the hands of director Simon Phillips and choreographer Andrew Hallsworth.

It’s on at Playhouse at Arts Centre Melbourne until 14 August 2019.

* I saw the first preview performance of the play.