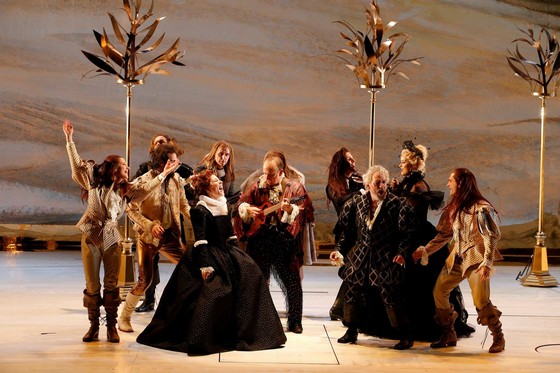 Here I’m indebted to SparkNotes for helping me to unravel the intricacies of Shakespeare’s Old English. The action is set in the kingdom of Illyria . Off the coast, a storm has wrecked a ship and a young aristocratic woman, Viola (Esther Hannaford), is swept onto the shore. Assuming her twin brother, Sebastian (Caleb Alloway) – for whom she is a dead ringer – has drowned, she prevails upon a friendly sea captain (Roderick Cairns) for help. Disguising herself as a man and assuming the name Cesario, she goes to work in the house of Duke Orsino (Lachlan Woods).

Orsino pines for the love of Lady Olivia (Christie Whelan Browne), but she refuses to entertain any male overtures because she is in mourning. Viola (as Cesario) quickly becomes a favourite of Orsino and finds herself falling in love with him, but cannot act upon her feelings because Orsino believes her to be a man. When Orsino sends Cesario to deliver love messages to Olivia, Olivia herself falls for Cesario (in spite of Olivia’s earlier rejection of any male suitor), she too believing him to be a man.

Happiness eludes everyone – or does it?

We meet other members of Olivia’s household, including her rowdy drunkard of an uncle, Sir Toby Belch (Richard Piper), his foolish friend, Sir Andrew Aguecheek (Frank Woodley) and the clever clown of the house, Feste (Colin Hay). That’s not to overlook Olivia’s lady in waiting, Maria (Tamsin Carroll) or the prudish steward of the household, Malvolio (Russell Dykstra).

When Sir Toby and the others take offense at Malvolio’s constant efforts to spoil their fun, Maria engineers a practical joke to make Malvolio think that Lady Olivia is in love with him. It works spectacularly.

This production of Twelfth Night has so much to love . It’s witty, lyrical and impressive. It starts with the audaciously overblown characters, who are played strictly for laughs. The musical accompaniment is first class, with Caleb Alloway, Roderick Cairns, Anthony Harkin and Alec Steedman, among those responsible. Ian McDonald is the musical director. 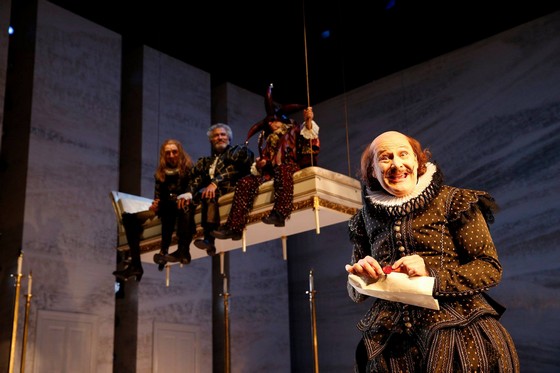 The staging is magnificent, with period props – like a chaise lounge – appearing from the heavens, or, in the case of a front door, rising from the depths. The cast are resplendent in over-the-top costuming (Gabriela Tylesova is the set and costume designer).

Twelfth Night is a hoot from start to finish, worthy of a standing ovation. Whether you’re an unabashed Shakespeare aficionado or unfamiliar with the Bard’s brilliant turn of phrase, this is a play to savour. It’s playing at Southbank Theatre, The Sumner until 5 January 2019.