All the Money in the World is prolific filmmaker Ridley Scott’s dramatization of the real life kidnapping of J Paul Getty III. He was the 16-year-old grandson of oil magnate J Paul Getty, the richest man in the world (Christopher Plummer).

In 1973, the teenage Getty (Charlie Plummer, no relation to Christopher) was living in Rome. Calabrian gangsters snatched him off the city streets and held him for ransom. The kidnappers demanded $17 million. Getty refused to pay; fearing that to do so would open the floodgates for similar demands involving his other 14 grandchildren. Despite being a multi-billionaire, Getty preferred to spend his money on art and antiques because – unlike people – they would never let him down. The young Getty’s mother Gail (Michelle Williams) tried to gather the money to secure her son’s release. But as she was divorced from her son’s father – confusingly John Paul Getty II (Andrew Buchan) – she had no access to the Getty fortune. 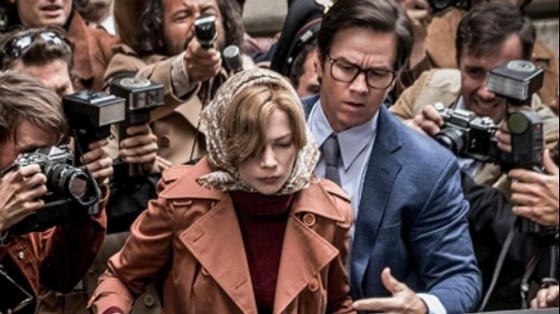 Negotiations dragged on for nearly six gruelling months. The family hired ex-CIA agent Fletcher Chase (Mark Wahlberg) to try and negotiate with the kidnappers. Chase had previously worked as a security specialist for Getty Snr. Gail found herself relentlessly pursued by the paparazzi. During the long ordeal the young Getty managed to form a rapport with one of his kidnappers Cinquanta (Romain Duris) who began to feel protective of the boy.

This true-life crime drama has been written by David Scarpa (the 2008 remake of The Day The Earth Stood Still). Scarpa based it on Painfully Rich: The Outrageous Fortunes and Misfortunes of the Heirs of J Paul Getty, John Pearson’s non-fiction account of the kidnapping and its aftermath. The film explores themes of greed, obsession and family. There are quite a few subplots running throughout the narrative, and not all of them are successful. And I feel Scarpa has taken some liberties with the story for dramatic effect.

Scott’s pacing though is a little slow and the film plods along, almost as if Scott is in no hurry. The film spans some six months, and occasionally it feels like real time. There’s a frustrating lack of cohesion to the early scenes, which jump around in time and location and effectively keep the audience at a distance. The tension only ratchets up in the latter stages of the film as Chase and Gail close in on the kidnappers. There’s also a rather disturbing scene in which the kidnappers cut off young Getty’s ear to increase pressure on the family to pay the ransom.

All the Money in the World will forever be remembered as the film in which the disgraced Kevin Spacey was replaced after the film had been completed. Christopher Plummer stepped into the role of J Paul Getty. For the most part, Scott re-shot Spacey’s scenes with Plummer, although one early sequence set in the desert obviously employs CGI. Scott incorporates Plummer’s scenes almost seamlessly into the film.

For his part, Plummer is perfectly cast as the misanthropic, miserly millionaire. He plays him as a cold-hearted  narcissistic; a smarmy and ruthless monster. He brings unexpected nuances and some dark humour to the role. This is a powerful performance. But it’s a far cry from his beloved portrayal of Captain Von Trapp in the classic The Sound of Music. The movie is at its most involving and gripping whenever Plummer senior is on screen. (Ironically, we recently saw him as the model for the miserly Ebenezer Scrooge in The Man Who Invented Christmas.)

One day the footage featuring Spacey’s performance may surface as extras in a director’s cut of the film though and we will be able to compare the two.

Williams (Manchester by the Sea) brings gravitas and a real sense of desperation and anguish to her performance as the increasingly frantic Gail, and she is the emotional heart of the film. Wahlberg (Daddy’s Home 2) does what he can, but Chase remains a fairly bland character. The scenes he shares with Plummer though crackle with tension. And while Getty junior may be the victim here we don’t really get to empathise with him. The character remains largely underdeveloped. The cast also includes Timothy Hutton, who is solid as Getty’s pragmatic lawyer Oliver Hinge.

This is a handsomely mounted production. Regular Scott collaborator Arthur Max uses a production design steeped in 70s ambience. The film has been crisply shot in widescreen by Dariusz Wolski. His burnished colour palette evokes the era and gives the film a noir-like look and feel.