The Alan Ayckbourn play Taking Steps, written in 1979, is the 24th opus from his ‘genius’. He’s now completed some 79 plays, the last one – so far – called Roundelay, in 2014. Taking Steps is part of a faithful commitment by The Ensemble Theatre to his work and underlines the entertainment value that he inevitably delivers for audiences. 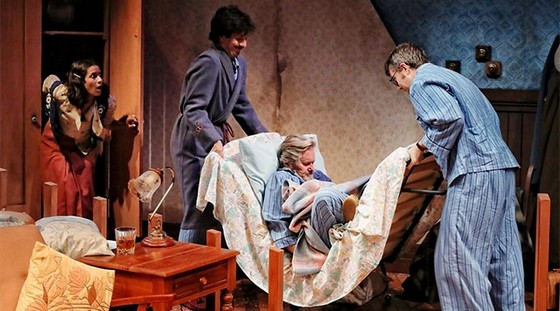 There is usually some ‘challenge’ that the writer has given himself, for the audience’s delectation, in all of his plays. In Taking Steps, Mr Ayckbourn has presented a three story house in which the action takes place but has insisted that it all take place on the one flat plane. Originally the play was created for a total in-the-round space, and I guess the Ensemble stage with its three sided auditorium is nearly that. (The Ensemble began as a theatre in-the -round). Director, Mark Kilmurry along with his Designer, Anna Gardiner, have created a three story space, with furniture for three different rooms to allow the action to simultaneously take place – the furniture for the three rooms and all the props are all there even if the impression is one of it being a bit overcrowded for the action to be able to happen, especially as the six actors negotiate it all. (Lighting Design is by Scott Allan.)

The sterling actors do manage it brilliantly, even with the feet of the audience on the stage in the front row being an extra ‘live’ hazard each night! The actor’s, also, create with a running visual ‘gag’ the climbing up-and-down of two sets of invisible stairs (forwards and backwards!), that culminates, once the audience has caught on to the ‘trick’, in a participatory endowment by the audience to the comedy of the Ayckbourn construct – it adds to the visual juxtaposition a great deal of the comic possibilities, – laughter – which is part of the great tradition of farce on stage.

The play is set in an old Victorian house called The Pines – an ex-bordello – supposedly haunted by a ghost that Roland (Peter Kowitz) has decided to buy and repair as a nest for his latest wife, ‘a Dancer’, Elizabeth (Christa Nicola). She is in despair, after only three months with this arrangement and as the play begins is packing her stuff and insisting that her brother, Mark (Simon London) help her escape before Roland returns. Of course Mark has his own dilemmas with his prospective partnership with Kitty (Emma Harvie), his ex-fiance, who jilted him in the honeymoon hotel, who has just returned, reluctantly, after an exploratory jaunt in Europe alone, that ended in disaster. She is accommodated, briefly, of course, in this house unbeknownst to any one else, by ever hopeful Mark. What Mark hasn’t quite grasped is that he is a very boring man who has the effect of putting people he is talking to, to sleep! To complicate matters further, the representative of the law firm for the selling of the property, Tristram (Drew Livingstone), a verbally inept communicator and extraordinarily shy (naive) gentle man, has arrived unannounced alongside the dodgy local builder, Leslie (Andrew Tighe), decked out in full motorcycle gear – helmet and all – desperate to get a contract signed for repair work to ensure his family are not driven to penury.

This is a situation comedy with each of the characters with typical comic characteristics that we can identify and expectantly anticipate will lead to ‘disasters’. The problem with Taking Steps, is that it takes nearly 75 minutes to get to the situation (thunder and lightening and all) with all of the characters in the house (at last) without enough wit (verbal and visual) that usually accompanies the material , by Mr Ackybourn, to get to that place in time. The second act, similarly, leisurely, unwinds the comic crashes where in the end character characteristics becomes more the focus than the tiresome situation.

This is not one of Mr Ayckbourn’s better plays. One titters, one hopes for more – occasionally there is a guffaw – but, to be honest, one needs a great deal of patience for a decent pay-off. This had nothing to do with the Direction, which is meticulous in its charting of the journey, nor to do with any of the performance which are expert, but with the writing. In the vast canon of Mr Ayckbourn’s work, there are, there must be, better scripts to tackle. There are.

What is the reward in this night in the theatre are the performances of all the actors. There is such confidence in the fully realised characters with all of their ‘eccentricities’ embraced and embedded for the trick of all comedy playing: the importance of being earnest. 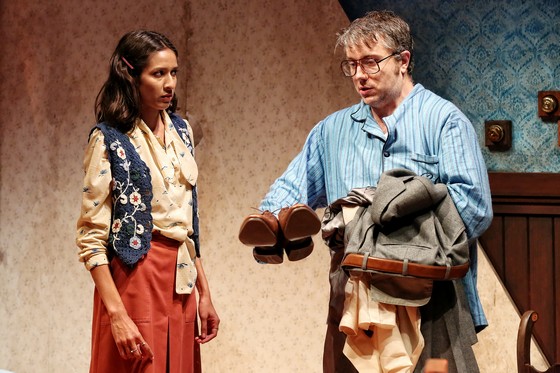 The standout performance is that of Drew Livingstone, who does not miss a beat with the magic of his comic opportunities with impeccable thought-filled timing and total extended belief in everything that happens to his poor Tristram.

Too, Simon London, with the difficult character trait of being the most boring man in the world, carries Mark with the unconscious ignorant/joie-de-vivre of a British Rank Organisation star, such as Dirk Bogarde, say, in the Doctor in the House, Doctor at Sea, Doctor at Large films of the 1950’s – handsome charm galore – one wishes Mark was not such an ignoramus of his true situation.

The two veterans in the production, Peter Kowitz, as a bluff alcoholic thoughtless ‘bully’, and Andrew Tighe, as a slightly inept human being, carry it all off with aplomb and effrontery. The two women, Christa Nicola and Emma Harvie, convince us well of their characters’ ineptitudes and pull off the early burgeoning of a ‘feminist’ rebellion statement by Mr Ayckbourn as their ‘worms turn’ for freedom, from these men, at the play’s end, or not!

Taking Steps, a low voltage comic night out, meticulously rendered by all. Pleasant if not vital.