We mainly know Mark Kilmurry as the artistic director of the Ensemble Theatre at Kirribilli. In Murder on the Wireless, Mark’s theatrical abilities are well on display as he has written, directed and acts in the production. A courageous undertaking but one successfully carried out, I’m pleased to report.

Murder on the Wireless is a novel and very entertaining piece of theatre. It’s a play within a play. In fact, it’s two plays within a play! The setting is the radio theatre studios of the EBC (Ensemble Broadcasting Corporation) in 1959. As the studio audience, we will witness the production of a double-feature murder mystery show with all the sneaky special sound effects revealed. 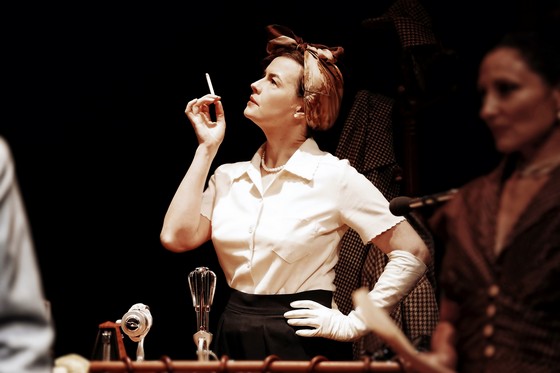 Once we’re all seated, Mark Kilmurry (as himself) welcomes us and introduces the other actors and production staff. It’s a bit of a rev-up to make sure we will play our part in ensuring appropriate applause and raucous laughter where required. Then the ‘ON AIR’ sign is illuminated and it’s on with the ‘live’ broadcast.

Once the play concludes, Mark addresses the audience again briefly whilst the EBC presumably has a news bulletin to broadcast.

Once again, the ‘ON AIR’ sign goes on and the second play called The Dead(ly) Wives Club begins. This is written by Mark Kilmurry and involves a divorced couple, Ridley Jones (Mark Kilmurry) and Teresa Scott (Georgie Parker) who team up to investigate and thwart a potential assassination. The story is high-speed with car chases, fast trains and, as the title implies, deadly wives.

Murder on the Wireless is a real team effort. I find it hard to fault the clever creativity of Mark Kilmurry, the distinguished presence of Daniel Mitchell and the sultry allure of Georgie Parker. They are all fine actors and this radio-play style suited them well. But the eyes of the audience couldn’t help but be drawn to Foley artist Katie Fitchett who so ably produced the sounds essential for the play. With a cigarette in mouth, slacks and a head scarf, she ran the sound props with ease and expert timing. Laughs were aplenty as she put her tools of trade to work, creating realistic sounds from everyday items such as pebbles, shoes, umbrellas, hot water bottle and hand mixer. 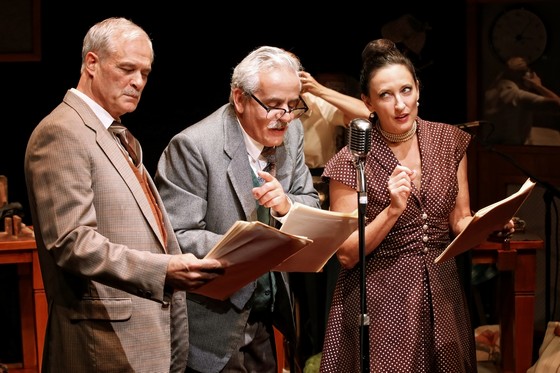 I admit, I ‘lost the plot’ at times as I tried to listen to dialogue while transfixed watching the frolics of the on-air characters matched to the sound effects.

This production was all about fun. The plotlines were light in complexity and light-hearted in content. The set reproduced the 1950’s era perfectly and the costumes were colourful and detailed. My only distraction was the air-conditioning in the theatre, set too low for a cold winter night.

Murder on the Wireless was a top-notch production and should be seen. It’s a notable reminder of how the wireless entertained the populace for decades by unseen actors, coconuts and pebbles.