Not only do recent Christmas movies tend to be more narky and mean spirited, but they also seem to be hitting cinemas earlier. Even though it is only November we have three Christmas themed films in our multiplexes. There’s Bad Moms 2, the home invasion black comedy Better Watch Out, and now we get Daddy’s Home 2. This is the underwhelming and unnecessary sequel to the 2015 comedy that starred Mark Wahlberg and Will Ferrell. And as with Bad Moms 2, this sequel brings in a couple of grandparents to shake up the dysfunctional family dynamics. 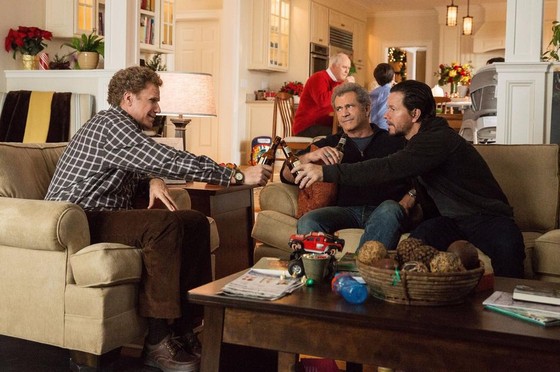 In Daddy’s Home, we were introduced to the warring co-parents. Wahlberg’s cool, confident Dusty Mayron, vying with Ferrell’s neurotic, milquetoast stepfather Brad Whitaker, to show the kids who was the best father. Both men eventually reached a compromise. They seem comfortable with their shared sense of responsibility and have become best friends.

When this sequel opens, they’re planning to spend the Christmas together as one big family unit. But complications arise when their own fathers turn up, raising a whole lot of awkward parental issues. Dusty’s father Kurt (Mel Gibson), a retired astronaut, is the overly macho, womanising type who disapproves of Dusty’s domestic situation. But Dusty is trying desperately to win approval from Kurt, whose unapologetic tough-love approach to parenting borders on neglect. Meanwhile Brad’s father Don (John Lithgow) is the more tactile sort, a tender man who wears his heart on his sleeve.

The two families spend the holidays in a luxurious mountain side Air BnB ski chalet. The set-up has plenty of potential, but unfortunately the script from director Sean Anders (Horrible Bosses) doesn’t deliver. The film explores themes of toxic masculinity, parenthood, family, gender roles, and the crass commercialism of Christmas.

Many of the jokes fall flat, and there are some dubious moments – one involving a drunken Nativity scene and another a shotgun – that misfire badly. The tone throughout is uneven. The mean-spiritedness eventually gives way to sentimentality. In the saccharine finale, the cast join together to sing the Band Aid anthem “Do They Know It’s Christmas”. Anders’ direction is pedestrian, with an episodic feel to the material.

Wahlberg and Ferrell have great chemistry and play off each other well. Their contrasting styles makes for a combustible mix. Ferrell’s Brad seems to be the butt of much of the slapstick humour here. His over-the-top performance seems to offer up yet another variation on his familiar buffoonish screen persona.

The strength of the film however seems to lie in the inspired casting of Gibson and Lithgow, who are perfect in their roles. Gibson has always shown a nice comic touch. Even some of his action films (like the Lethal Weapon series) have had a strong streak of humour. He brings a cool, gruff charm to his portrayal of Kurt and plays him with a twinkle in his eye and a sardonic sense of humour. Lithgow is also very good here. He reins in the usual hammy scenery-chewing style he perfected in the sitcom 3rd Rock From The Sun. John Cena returns as Dusty’s rival Roger, with a slightly more expanded role this time.

The female characters though are given little to do here. Linda Cardellini is wasted as Brad’s wife Sara. Former Victoria’s Secret model Alexandra Ambrosio has little to do as Dusty’s new wife Karen, who spends most of her time observing the family dynamics and making notes in her little black notebook.

Daddy’s Home 2 is however a slight improvement on both the original film and the recent, similar, Bad Moms 2; which is damning it with faint praise.