A compelling piece with a realistic feel, Menashe is shot almost entirely in Yiddish (there are a few lines of English).

Set within a Hasidic community in Brooklyn, Menashe follows a kind but hapless grocery store clerk named Menashe (Menashe Lustig). He’s trying to maintain custody of his son Rieven (Ruben Niborski) after his wife passes away. Menashe is trying to hold it together, but he’s prone to fits of anger. The tradition-bound culture requires a mother present in every home; so Rieven is supposed to be adopted by the boy’s strict, married uncle. 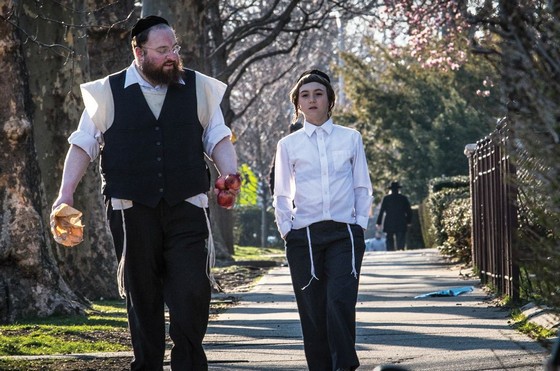 Still, Menashe’s Rabbi (Meyer Schwartz) decides to grant him one week to spend with Rieven before the memorial service. Their time together creates a bond between father and son. And it offers Menashe a final chance to prove to his skeptical community that he can be a capable parent.

In a stellar performance, Lustig inhabits the title character. His performance is all the more impressive when you realise the screenplay is based largely on Lustig’s life. I believed he was the screw-up he plays, someone whose life is unraveling at the seams.

An insight into religion, ritual, tradition and expectation, Menashe is short but unrelenting. The movie starts without any explanation or back-story; and the threads only come together as time passes.

More than half way through I started to gain an understanding of what happened to Menashe’s wife and the kind of life they lived before she perished. That, of course, is a deliberate and effective device from director Joshua Weinstein. This is Weinstein’s feature film debut (he previously directed documentaries and shorts); and he fills many additional roles as co-writer, co-cinematographer and producer .

I was taken aback by Rieven’s lack of emotion as he prepares for his mother’s memorial service. There are no tears and hardly a change in demeanour. In that regard, I wanted and needed more. Mind you, none of the mourners appear affected.

Overall then, I found Menashe raw but revelatory.