Three Cs describe Hir: confronting, colourful and comedic. By the way, the title is a gender-neutral pronoun. One character also likes being addressed as “ze”, as distinct from “she” or “he”.

After three years in the Marines picking up shattered body parts on the battlefield, Isaac is looking forward to coming home and sleeping in his own bed. Dream on … because that is not about to happen. Isaac wouldn’t mind a bit of hoopla surrounding his return either, even though he was dishonourably discharged. The welcome he receives is anything but what he hoped for. 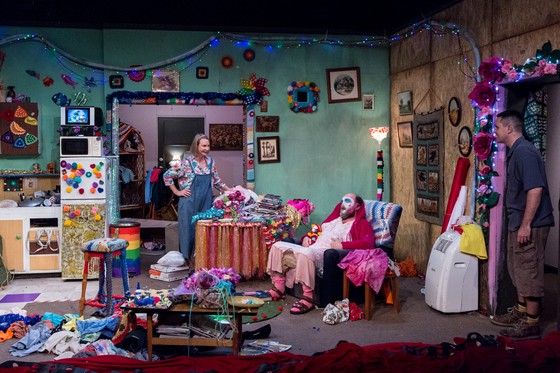 His family appears to have gone stark raving bonkers. Mind you, he heaves at the mere sound of the kitchen blender. So he is hardly one to speak – or is he? His father Arnold is in make-up and a clown’s wig wearing a pink negligee. His sister now identifies as transgender, using the name Max. Paige, his mother, has let the house go to pot. There’s stuff everywhere. And everyone seems to have a “couldn’t care less” attitude.

It turns out that Arnold – formerly an abusive man – has had a stroke. Paige is feeding him oestrogen (via a daily strawberry smoothie) to pacify him. She has him sleeping in a cardboard box (I kid you not).

Paige rules the roost now and how – barking instructions at Isaac and Max. Max vows to leave and seek refuge in a commune. I dare say this family would fit the dictionary definition of “dysfunctional” perfectly. And it isn’t about to get any easier when Isaac tries to stand up for their old way of doing things.

Hir was written by American actor, playwright, performance artist and singer songwriter Taylor Mac; who prefers to be known as judy (yes, lower case “j”). Much lauded and a finalist in last year’s Pulitzer Prize for Drama, Mac’s work has been described as a fight against conformity and categorisation.

Hir is an often disconcerting and challenging piece of work, as, no doubt, was Mac’s intent. At times it’s savagely funny, but also oh so sad. There are no convenient happy endings here and plenty of frustration, heartache, pain and anger along the way.

The first thing that strikes you at the Red Stitch Theatre is the strikingly busy set. I am a huge admirer of the company’s work in general, but its set designs always knock it out of the park. They make such good use of a small space. In this case, the plaudits must go to Adrienne Chisholm; who is also responsible for costumes. 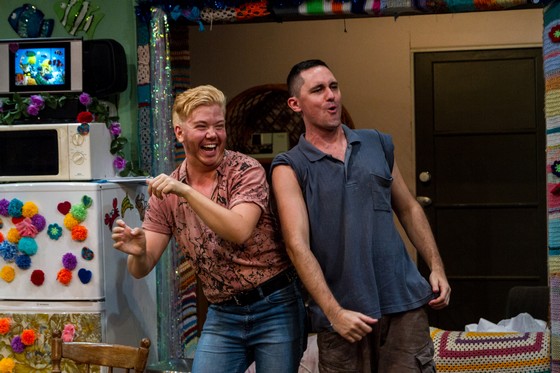 The characters are not ones you’ll readily forget. Paige (Belinda McClory) has made it crystal clear that the days of the patriarchy in this family are over, while Arnold (Ben Grant) has been left a mere shell of a man. Max (Harvey Zaska-Zielinski) is still wrestling with what to do in years to come, while Isaac’s (Jordan Fraser-Trumble) refusal to accept the new paradigm can’t end well.

Director Daniel Clarke ensures we won’t readily forget the often chaotic scenes. Hir is clearly a play not for all tastes. It pushes the envelope – and then pushes it some more. But surely Australia can only become stronger and more inclusive through the discussion sparked by the provocative treatment of material such as this.

Hir is playing at Red Stitch Theatre in St Kilda until 4 March 2018.