A man haunted by his past is forced to face his demons in the slow-moving horror film, The Vigil. 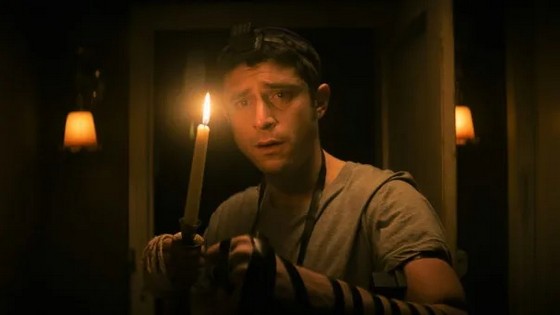 Yakov Ronen (Dave Davis) is a shadow of a man in the aftermath of a tragedy that befell his younger brother. He was present; but he didn’t intervene and before he knew it, it was too late. Ronen is on meds and has spent time in hospital (possibly a psychiatric hospital). Long a part of the ultra-Orthodox Jewish community, hears and sees things. He has turned his back on his former life to embrace a more open-minded approach to religion. But rabbi and community leader Reb Shulem (Menashe Lustig) – knowing Ronen is hard up for money – prevails on him to sit with the body of a deceased man, Mr Litvak, overnight in return for cash.

The practice is known as shomer and means to guard, watch or preserve. Ronen reluctantly agrees to do so, with his economic woes in mind. But he gets far more than he bargained for as he confronts the demon that has plagued the deceased man (and his wife) since Mr Litvak survived the Holocaust decades earlier. Gradually, the tragedy in Ronen’s back story – for which he has never forgiven himself – is revealed.

The Vigil is a film strictly for selective tastes. It’s rooted in Jewish culture and mysticism, and set in the unique world of the Hasidic community of Boro Park in Brooklyn. An understanding of the workings of religious Jews would be a distinct advantage. This horror film relies on tropes of the genre – darkness, shadows, disturbing music and shocks. The build-up is slow and not all that compelling. For much of it, I had in my head the adage “things that go bump in the night”.

A significant portion of the movie focuses on Davis (Logan) playing a lone hand as a man with visions and out-of-body experiences. The acting is, at times, unconvincing. While much of the “action” takes place in an old house at night, the lack of light means that on occasions I was straining to see exactly what’s going on. Often the music is scarier than the “tricks” on screen.

The Vigil is the work of first-time feature film writer and director Keith Thomas and while the film is not without merit – in terms of it being driven by past barbarities and disgraceful behaviour – his inexperience shows.