A remarkable piece of work, Loving Vincent is the world’s first fully painted feature film. Written and directed by Dorota Kobiela and Hugh Welchman, the movie brings to life the paintings of Vincent van Gogh, telling his astonishing story.

Every frame of the picture, some 65,000, is an oil painting. The finished work has been hand-painted by 125 professional painters from around the world. As remarkable as Vincent’s brilliant paintings is his passionate and ill-fated life and mysterious death. 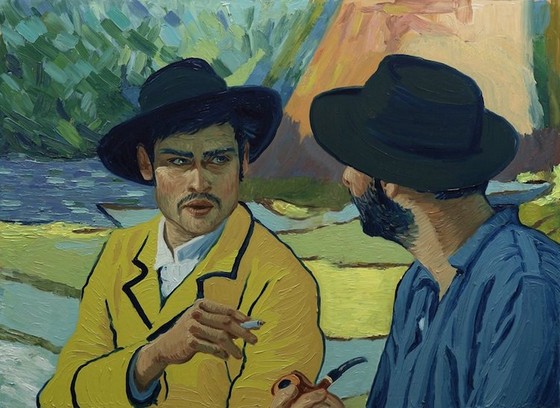 During his life van Gogh was variously labeled a martyr, a lustful satyr, a madman, a genius and a layabout. The “real” Vincent is at once revealed in his letters and obscured by myth and time. In his last letter, van Gogh said: “We cannot speak other than by our paintings”. The producers of this film have taken him at his word.

Loving Vincent was first shot as a live action movie with actors and then hand-painted over frame-by-frame in oils. The result is an interaction between the actors playing out Vincent’s famous portraits and the work of the painting animators.

The story is set in France in the summer of 1891, the year after van Gogh died. Postman Joseph Roulin (Chris O’Dowd) – a friend of van Gogh – has a special task for his son Armand (Douglas Booth). He gives the directionless young man a letter to hand-deliver. His express instructions are to pass it to van Gogh’s brother, Theo. Armand is none too pleased with the mission. He’s embarrassed by his father’s association with van Gogh, because the latter was a foreign painter who cut off his ear and was committed to a local asylum.

In Paris, Armand finds no trace of Theo. His search leads him to paint supplier Pere Tanguy (John Sessions). Tanguy tells him Theo died shortly after Vincent, apparently destroyed by the death of his older brother.

Armand journeys to Vincent’s final destination, to a quiet village outside Paris to meet Paul Gachet (Jerome Flynn), Vincent’s doctor, to find out why van Gogh took his own life.

I love the fact that the filmmakers turned the story into a who-(or rather, why-)dunnit. It gave the tale urgency and purpose, especially as the investigator is a most reluctant starter. He’s an unlikely focus of attention, given that he doesn’t care for the responsibility he has been given. The longer Loving Vincent went though, the more confused I became, as I tried to get my head around what led to van Gogh’s demise.

Some of the key players are more fleshed out than others. The paintings really look like they have come alive. The performers’ likenesses certainly allow you to make out who the actors are.

Loving Vincent is inventive, bold and original. It sparks emotions in the same way that an animated feature does. Cinema meets art and is fused together by modern technology – genius. It scores an 8 out of 10.