Mind you, the exhibition itself featured what is termed a reflectogram (which reveals the drawing lines beneath a painting) of the original work because the space only allowed for a maximum of 10,000 visitors a day. The Mona Lisa attracts at least 30,000 patrons daily. 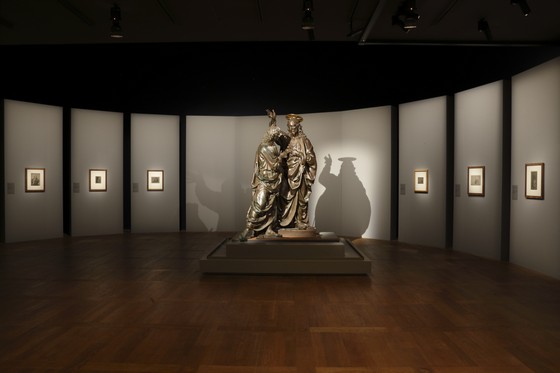 The doco – which showcases both the Mona Lisa and the reflectogram of the artwork – unpicks the mysteries and magic behind some of the master’s most notable works, including The Last Supper. As the title suggests, it is an after dark private tour led by the exhibition’s curators – Vincent Delieuvin, chief curator of the Department of Paintings, and Louis Frank from the Department of Print and Drawings. Both are incredibly instructive – not surprising, given they have been working on this project for 10 years.

What unfolds is an eye-opening art lesson about a man who was born illegitimate and who showed immense talent from an early age. We begin with his indentured period, where he learnt and mastered light and shade. Next, movement becomes central to his evolution. He drew inspiration from Flemish painters and was able to extract much more life from his work by introducing oil paints. At age 30 he forged an independent path.

The doco reveals da Vinci had a voracious appetite to learn more about all sentient beings and living forms. He had a penchant for science and mathematics. He was never without notebook at the ready and his notations and drawings filled every square inch of the pages he populated. In fact, da Vinci produced no less than 4,000 written documents, which serve to illuminate his life.

Emphasis is placed on the preparatory drawings for and underdrawings in da Vinci’s completed and incomplete paintings. He was nothing if not a perfectionist, forever striving for the right balance and thereby regularly modifying his work. Da Vinci comes across as a deep thinker who, arguably better than anyone, could capture the essence of man and his innermost feelings. Much of his work was based around religious themes.

For anyone who has had the good fortune to visit the Louvre, the documentary starts with some stunning visuals of the external forecourt bathed in yellow light. Of course, what immediately stands out is the stunning, large modern glass and steel pyramid structure at its epicentre, surrounded by three smaller pyramids. It made the hairs on the back of my neck stand up. Once inside we see the hallowed halls, resplendent with the beauty of the paintings and sculptures that are their real treasures.

The brilliance of the cinematography allows us to get up close and personal to da Vinci’s astounding legacy. Complete with classical music interludes, A Night at the Louvre: Leonardo da Vinci served to heighten my reverence and awe at the sheer brilliance of his life and work.