A mind-numbing comedy for senior citizens, Never Too Late relies on fanciful nonsense to move the story forward.

A voice-over by Jacqui Weaver as Norma McCarthy sets the scene. Norma once met a handsome soldier Jack Bronson (played as an elderly gent by James Cromwell) the day before he shipped out to Vietnam. If he’d asked her to marry him there and then, she would have said yes. As it was, he and three comrades – Angus Wilson (Jack Thompson), Jeremiah Caine (Dennis Waterman) and James Wendell (Roy Billing) – from an elite squad fought in the war, were captured, held as prisoners and escaped. The quartet became known as the Chain Breakers. 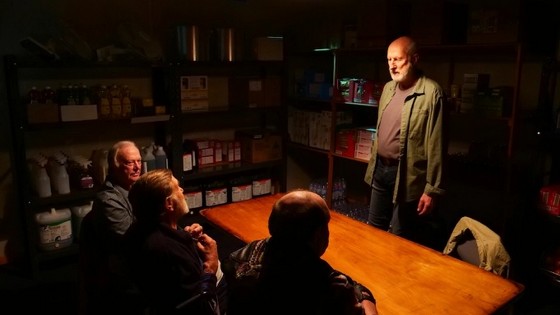 Now, one by one, all of them have made their way to the same retirement home for veterans. All have a variety of ailments. The last to arrive is Bronson, who was their leader. Although he doesn’t feel he belongs in a retirement home for old codgers, one of the first people he spots is Norma. He’s carried a torch for her all these years and she reciprocates his feelings, even though they haven’t seen one another for five decades. But before Bronson can finally rectify his error, Norma – who is suffering from the early stages of dementia – is whisked away to another home. The rest of the movie sees Bronson and his cohorts trying to break out of the home, so he can pop the question to his beloved.

Who makes up this nonsense? Well, the story is by Luke Preston and Grant Carter, with the former responsible for the screenwriting. Direction is by Mark Lamprell.

Collectively the key players are painted as silly old farts. Rather than simply laying his cards on the table, Bronson hatches elaborate plans, invariably involving subterfuge. I understand that, but what troubles me is that the lightweight plot treats oldies with contempt. The humour is puerile and more often than not obvious. The cast also includes Shane Jacobson as the son of one of the vets and Max Cullen as another dude way past his prime.

In short, I was left bitterly disappointed by the vacuousness of Never Too Late. Instead of an intelligent adult comedy, I experienced almost 100 minutes of errant claptrap, including a syrupy soundtrack. Perhaps this should more accurately have been titled Far Too Late.