So far as US network television is concerned, The Good Wife ticked a lot of boxes. The legal drama scored a host of awards and, it’s fair to say, was missed by many when it finished in 2016. If you’re one of those, you may want to tune into The Good Fight, now showing on SBS. 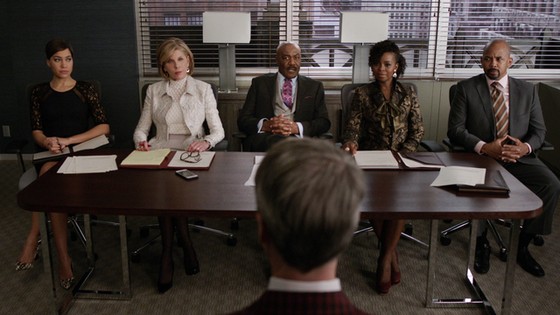 The pilot opens with Diane Lockhart (Christine Baranski) ready to retire from her law firm and settle in the idyllic French countryside. She’s also taken on Maia Rindell (Rose Leslie) as an intern. Maia is the daughter of Diane’s longtime financial adviser Henry Rindell (Paul Guilfoyle). But when Henry is accused of running a Ponzi scheme, everything crumbles. Diane’s retirement nest egg is lost and she must keep working. Problem is, she’s already signed an exit agreement with her old firm. That means she has to find a new home.

Having worked as an attorney for the city defending police brutality case, she unexpectedly finds herself on the other side of the desk. Adrian Boseman (Delroy Lindo) offers Diane a role with his plaintiff law firm. With few options, Diane accepts. What starts out amicably enough soon becomes a little tense. Diane discovers her former associate Lucca Quinn (Cash Jumbo) is now a partner at Boseman’s firm. As an Anglo in a predominantly African-American firm, Diane sticks out; all the more so when she brings Maia over as well.

The Good Fight largely sticks to the template of The Good Wife. The blend of politics and courtroom drama is much the same; although now it’s flipped in a way. Instead of high-level intrigue, the political side of things is more personal in a way. The writers largely focus on contrasting the lots of the “haves” and “have-nots”. A distinct thread of racial and sexual politics runs through the show. And a frisson of that creeps into the courtroom scenes also.

The show’s main problem may be tying itself into the world of The Good Wife. I found the fact many of the characters here who are apparently close to Diane made no appearance at all in The Good Wife a little jarring. Also, is the whole Ponzi-scheme angle becoming a bit of a trope now? It seems to be used an awful lot.

That said, those quibbles largely fade away by the third episode. Once you’re “in” the show, it all makes a kind of sense. Although Christine Baranski and Delroy Lindo largely boss the acting stakes, the cast is strong. Rose Leslie (Game of Thrones) is agreeable if a little distant as Maia. Cash Jumbo however relishes her renewed role as Lucca, and delivers a strong performance episode after episode.

If you liked The Good Wife, odds are you’ll like The Good Fight. There’s something to be said for staying true to your roots. After all, once you’ve hit on a winning formula, you might as well stick with it.