Okay, I admit I’ve been a bit slack. I really should have written something on the quirky Search Party before now. However, it’s thankfully still airing and available, so it’s not too late to dive in.

Part of my hesitation over this show involves just how to describe it. It’s funny; but it’s not a comedy. There’s a mystery, but it’s not a thriller. There may have been a crime, but it’s not a cop drama. From the minds of creators Sarah-Violet Bliss, Charles Rogers and Michael Showalter, Search Party is all those things – and none of them at the same time. 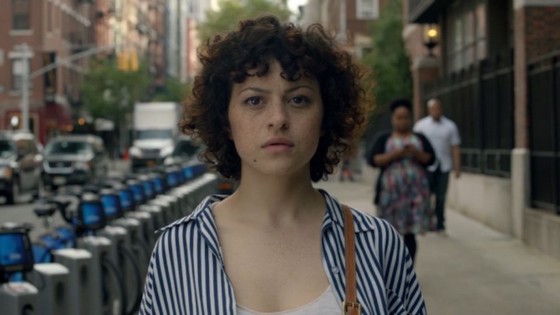 Superficially at least, the plot is pretty straightforward. Chantal Winterbottom (Clare McNulty) is missing. A poster on a lamp post piques the interest of Dory Sief (Alia Shakwat). Although Dory and Chantal were at college together, they weren’t really close. Dory however feels a strong connection to the mystery of Chantal’s disappearance. She ropes in her reluctant, self-absorbed boyfriend Drew (John Reynolds) to help her out. Before long, her friends Portia (Meredith Hagner) and Elliot (John Early) are swept up in the drama. Together they form the search party of the title – but their methods are, well, unconventional to say the least.

As much as it’s a story about a missing woman, Search Party is the story of intersecting lives. We often know people without really “knowing” them; and the show plays on that conceit – in several clever ways. That leads to some funny and decidedly quirky situations. Without giving anything away, not all is what it seems.

It also plays into some very contemporary issues. The disconnection brought about by a society obsessed with devices is just one. The show effectively holds a mirror up to some uncomfortable aspects of living in the 20-teens.

Search Party is one of those shows with a particular sensibility. I guess it’s similar to Arrested Development (in which Alia Shakwat also appeared), with the absurdity dialled down but the human drama ramped up. If you can relate to that, then this is the show for you. Be prepared for twists and turns. Also be prepared for those twists and turns not to play out as you expect.

As the determined Dory, Alia Shakwat is basically the “glue” of the show. She doesn’t get a lot in the way of straight comedy in that role, but does get to spread her acting wings. John Reynolds (Stranger Things) plays Drew as a dour, risk-adverse individual with many hang-ups. His character has to endure many of the show’s crueller twists. The humour is provided mainly by Meredith Hagner and John Early as the vacuous Portia and Elliot. Their characters are preening narcissists who feed off each other, and the actors clearly savour that interaction. Later in the season, actors like Ron Livingston (Boardwalk Empire), Rosie Perez (Pitch Perfect 2) and Parker Posey (Café Society) make appearances.

If, like me, you missed the start of Search Party , it’s well worth seeking out now. It screens at 8 p.m. on Tuesday nights on SBS’s Viceland channel. The entire first season is also available via SBS On Demand. The show has also been renewed for a second season.