Of all the high concept TV around at the moment, The Good Place probably has the highest concept of them all. I mean, it’s a brave show that starts out with a dead protagonist. It’s an even braver show that tackles deep philosophical themes. But it’s a brilliant show that can pull all that off with grace and charm.

The Good Place is now in its second season, so if you haven’t seen it yet, you’ve got some catching up to do. Oh, and don’t skip the first season, because there’s a huuuge twist you need to know about. 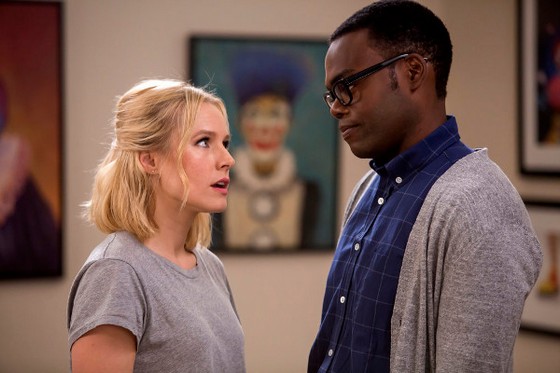 So head back to season 1, episode 1 and meet Eleanor Shellstrop (Kristen Bell). She’s sitting in what seems to be a reception area. The sign on the wall reads: “Everything will be just fine”. She then meets Michael (Ten Danson). Michael explains to Eleanor that she’s dead. When you die, you can go to the “bad place” or the “good place”. But not to worry, because this is the “good place”. Michael is an “architect”, who has built an idyllic “neighbourhood” in the “good place”; and is kind of the mayor. He’s assisted by the ever-present Janet (D’Arcy Carden), a kind of living Siri.

Thing is, Eleanor seems to have been mistaken for someone else. Michael is convinced she’s Eleanor Shellstrop, environmental lawyer. But this Eleanor is Eleanor Shellstrop, dodgy medication salesperson. Still, faced with the alternative of having to go to the “bad place”, Eleanor decides to wing it. She’s then introduced to her “soul mate”, Chidi (William Jackson Harper), a philosophy professor. The two are paired up at the welcome party with philanthropy princess Tahani (Jameela Jamil) and her “soul mate” Jan Yu (Manny Jacinto), a silent monk. But when things start to go awry in the “neighbourhood”, Eleanor realises it could all be her fault. What if she really should have gone to the “bad place”?

Michael Schur, creator of the much-loved Parks and Recreation, is the mind behind The Good Place. As with Parks and Rec, this show takes an unfamiliar situation and builds on it though relateable characters and gentle humour. And since Parks and Rec was able to sustain itself for seven seasons, you’d have to think this has a pretty good shot at doing the same.

But probably the key to both shows is that they don’t treat their audiences like idiots. Take, for example, the episode in season two titled “The Trolley Problem”. The “trolley problem” is a thought experiment in philosophy. But rather than a dry dissertation about it, the show deftly illustrates it in a way that’s refreshingly enlightening.

Kristen Bell has been embracing her inner rebel lately with the Bad Moms films, and does so to a lesser extent here. Eleanor was basically a bad person in life, but has been given a second chance in the “good place”. Bell neatly balances the two sides of the character in a winning performance. Ted Danson is the perfect foil as the seemingly infallible Michael. His dapper manner is a highlight. William Jackson Harper cleverly plays Chidi toi bring out his myriad contradictions. Jameela Jamil gives Tahani a touch of class, while Manny Jacinto gets to have a whole lot of fun as Jan Yu.

If you’re an old Parks and Rec fan looking for something new, The Good Place will be right up your alley. But even if you’re not in that category, you should give this insightful comedy a go.

The Good Place is now streaming on Netflix.