Good Cook. Friendly. Clean. is a new Australian play by newcomer, Brooke Robinson. It was short listed for the 2017 Griffin Award.

Sandra, a 58 year old finds herself with a two week deadline to find new rental sharehouse accommodation in Sydney. Over nine scenes we travel with Sandra to a series of meetings – interviews – in her search for that refuge. She ends her journey in a shared hostel environment curled, ill and defeated. 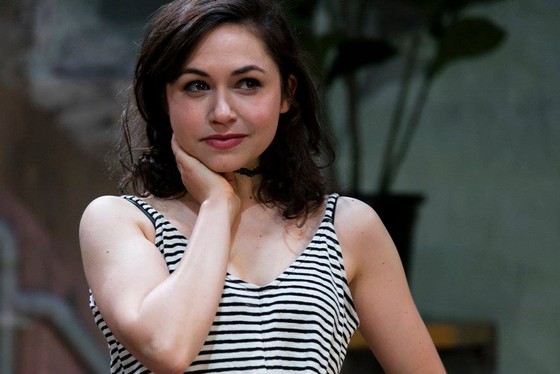 From the blurb on the back cover of the published text:

Brooke Robinson has written an unflinching examination of homelessness, asking how willing are we, as a society, to take care of our most vulnerable. As the housing crisis worsens, what happens to people like Sandra – to those who don’t own a home, who are getting older and don’t have family to fall back on? … Good Cook. Friendly. Clean. is a devastating portrait of someone slipping through the cracks . …

Two actors: Fayssal Bazzi (B) and Kelly Paterniti (A) play different couples interviewing Sandra in her search, played by Tara Morice. The fundamental self-absorbtion of these various denizens of Sydney (could be any modern city) reveals a society that truly is ‘loveless’ and has the unrelenting cruelty of a total lack of empathy. Rather, then, this play being a portrait of an individual in trouble, it is a frightening portrait of a de-humanised society/culture. In this production, of Sydney.

It has been suggested that this play is ‘funny until it’s not’ but the experience I had with a general public (GP) audience on a recent Saturday night was one of decided bleakness that was crushingly ugly and gave a stench of despair palpable in the relative silence of the audience’s consistent response. Funny this play was not, much – ever – at this performance.

Mr Bazzi and Ms Paterniti, played their various incarnations at a frenetic pace, revealing versatility but with little reach to invite the audience into the various situations. They played rather ‘at’ us than ‘for’ or ‘with’ us. It may be that this ‘style’ of playing was what muted the “funny” – the satiric comedy. In truth, the characterisations had the sense of television sketch surface with not much life-history lived through the ‘disguises’ of the many impersonations for the audience to even to want to listen, or to give credibility to any of the ‘B’s’ or ‘A’s’ from the writer. Or, are these people so reprehensible, without a single redeeming  feature, that revulsion and rejection were the only civil response possible?

To balance these cold, ferocious observations that Brooke Robinson has created, Sandra who, mostly, is bombarded with the brickbats of this inhuman behaviour, responds in a relative silence, except when in growing desperation she attempts to comply with the wishes of her interviewers, no matter the absurdity of their demands. Tara Morice with the instincts of the knowledge of those who have suffered imbues and radiates the decline of this woman with such sureness that the cruelty of each episode becomes painful to watch and to be able to be endured with any comfort. The defiant spectacle of Sandra’s final gesture in the hostel is wincing in its power and leaves one floored with a kind of grief. 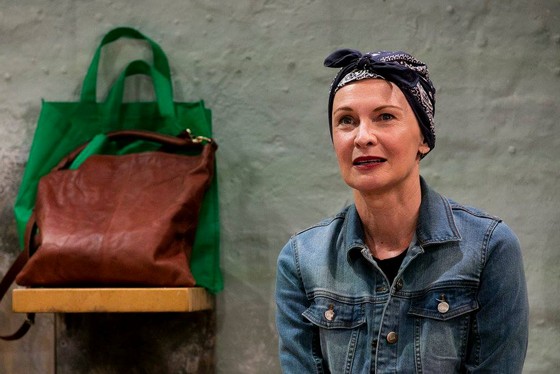 The grief is not for Sandra, alone, but for our society, as observed by this young writer, with its stealthy toxicity, wreaking of a decay that the overwrought pursuit of power represented by property and money has created.

The play is directed with a brisk superficiality, promulgating a brusque tempo by Marion Potts.The design, by Melanie Liertz, gives an impression of a city in permanent renovation.A whizz-bang lighting design by Alexander Berlage carries narrative as well as visual practicality. It’s all enveloped dramatically with composition and sound design by Nate Edmondson.

Good Cook. Friendly. Clean. conjures the spiritual effect of a terminal despair and reflected for me the same rumination about the world that one finds oneself in at the moment, as the brilliant Russian film, now showing about town, Loveless from director Andrei Zvyaginstev, does.

Is this play an accurate mirror of the world, our audience’s world? Go, see.