Going Down is one for the “me” generation; the hedonists who would rebel against their past. The hero is brought kicking and screaming to understand that her origins not only mean something, but are the cornerstones of who she is – and she will become. 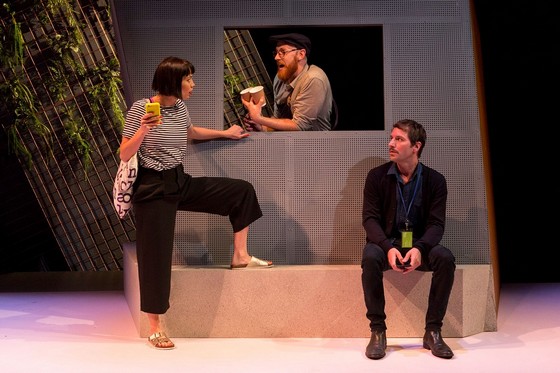 Natalie Yang (Catherine Davies) is a young Hmong-Aussie living in Melbourne. Her heavily sexualised memoir, called Banana Girl, has just been published. The book has done okay; but a talk about it to the conservative, elderly residents of Nagambie (in country Victoria) doesn’t go according to plan. They’re far more interested in Natalie’s ethnic roots.

No doubt Natalie loves random sexual encounters, which appear to define her life, but she shies away from her cultural legacy. The last thing she wants to talk about or write about is her family. But that topic that has won fellow young scribe, Indonesian political refugee Lu Lu Jayadi (Jenny Wu), a Miles Franklin Award short listing.

Natalie disdains Lu Lu. She becomes even more peeved when Lu Lu is invited to speak at a function. To make matters worse, Natalie’s best friend, Tilda (Naomi Rukavina) has organised the function. Then her other BFF and work colleague Matt  (Paul Blenheim) announces she’s about to be retrenched. He will be taking over her position. Natalie feels spurned. Subsequent interactions – with Lu Lu and with her (Natalie’s) Canberra-based mother (also played by Jenny Wu) – however will help shape her future.

Going Down is wickedly clever and funny. It’s most relevant to Australia’s changing society, in which minority groups play an increasingly important role. Humour is an invaluable tool in sheeting home the importance of family and heritage. 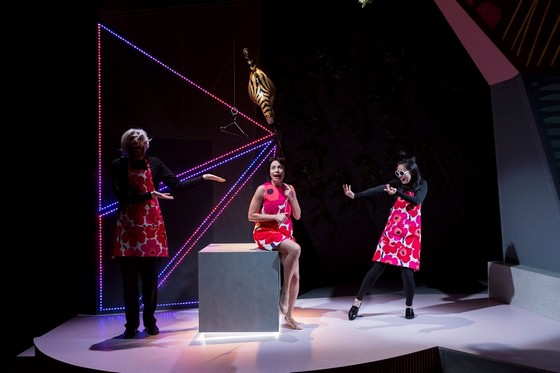 Much of the material is slapstick, deliberately exaggerated for effect. The actors cash in; delivering at breakneck speed. Bad language and a cheeky bit of nudity are par for the course. Sex scenes are primarily played out hilariously via a slide in/slide out set feature (to say any more would be to spoil the surprise).

Leticia Cáceres directs this memorable production of Going Down; which should hold particular appeal for a younger demographic. It’s playing at Malthouse Theatre’s Beckett Theatre until 3 June 2018.