Just where the line between sanity and madness lies is one of the questions in Bliss. Another concerns the true value of the contribution one makes in life. 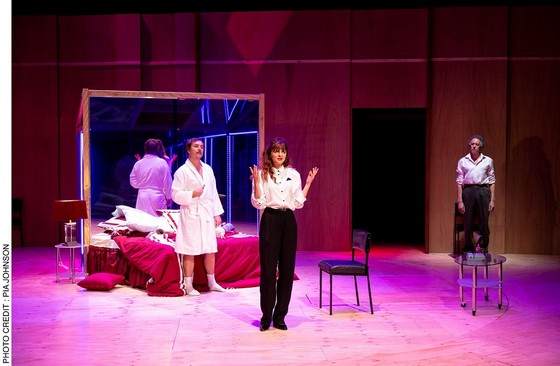 Everyone loves Harry Joy (Toby Truslove). The world revolves around the successful advertising man who runs his own agency. Then, on a sunny afternoon, when aged 39, he dies … well, his heart stops for nine minutes, during which he experiences pleasure and pain. When he’s brought back, he’s a different man. No longer the happy-go-lucky “good bloke” (as his wife puts it), he’s paranoid and sees conspiracies everywhere. He doesn’t believe anything or trust anyone. He sees fakes instead of family members. Allies have become enemies.

Harry concludes this bizarre world has been there the entire time, only he has been unable to see it until now. Bettina (Amber McMahon), his wife, is having an affair with one of Harry’s employees (Mark Coles Smith). His teenage daughter Lucy (Charlotte Nicdao) has become a drug addict. And son David (Will McDonald) is a dealer.

Meanwhile, Harry is seeing an escort, Honey Barbara (Anna Samson). And, after a decade, he’s about to ditch one of his firm’s best clients because their products contain carcinogens. Everyone thinks he’s gone stark raving mad. Harry ends up in an institution, but when he gets there, he finds there’s not just one Harry Joy, but two. The other – Alex Duval (Marco Chiappi) one of Harry’s senior employees – just happened to be in the wrong place at the wrong time. He’s now attempting to cash in on Harry’s cachet.

After his release, Harry’s delusional world continues on its unpredictable path. Before this is over, he’ll be spending his days planting trees and making honey.

I recall seeing the film version of Bliss starring Harry Otto in 1985; and found it did my head in. More than 30 years on, it still does. I defy you to make sense of even small portions of it. I gather it is meant to be an ode about a hellish Australia. It is a step into the world of absurdity. If that appeals to you, then this is for you. 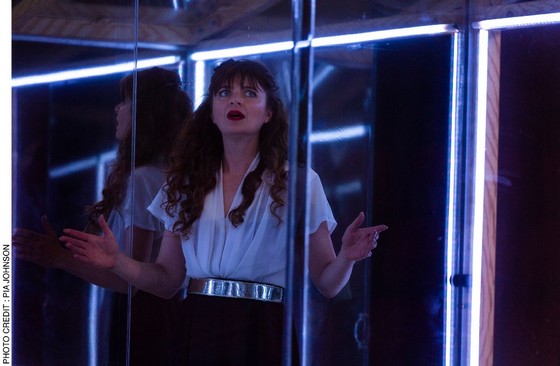 I can’t say I particularly took to the staging. It included a large elevated platform where the action took place. It dominated the theatre. The stage featured a revolving section that seemed to be perpetually turning for no good reason in the early part of proceedings. In fact much of the stage remains unused throughout. A greenhouse where by-play occurred was the dominant feature and it, too, was hardly impressive.

Bliss has been adapted for the stage by Tom Wright from the madcap 1981 novel by Peter Carey. This version is directed by Matthew Lutton and is playing at Malthouse Theatre’s Merlyn Theatre until 2 June 2018. The first act runs for 75 minutes and the second 70 minutes. It’s a long sit.