Co-directors and writers Eshom and Ian Helms have crafted a stunning piece of whack-battery that seems more like a fever dream than an actual plot. Not that there’s anything wrong with zany ideas. Many great movies feature bizarre ideas re-framed into compelling drama (see: any time travel movie). But Fatman is so gloriously over-the-top, I doubt even the Helms brothers fully grasp what they’ve done. 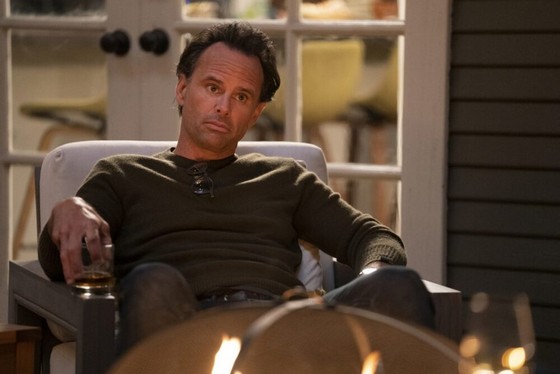 Okay, so that said, let’s strap in for a bit of a plot summary. In the world of Fatman, Santa Claus – a.k.a. Chris Kringle (Mel Gibson) – is very real. He lives in a small Alaskan town with his wife Ruth (Marianne Jean-Baptiste). But things are tight. Apparently the US Government pays Chris a subsidy to deliver presents to children. But unfortunately ol’ Chris has been a bit light on this year, meaning his subsidy has been cut. But Uncle Sam has an offer to boost Chris’s takings. For reasons I didn’t really follow, the US military wants to sub-let his elves’ workshop in order to pump out something (some kind of widget, I think – doesn’t matter). Cash-strapped Chris has little option but to agree.

Meanwhile a rich kid named Billy Wenan (Chance Hurstfield) regularly hires an enforcer known as Skinny Man (Walton Goggins) to intimidate pre-teen girls so he can win prizes he doesn’t deserve. But when he discovers Santa has left him a lump of coal for Christmas, he tasks Skinny Man with carrying out a hit on Chris – as you do. Shenanigans ensue.

Even in the realm of recent Mel Gibson movies, this film is out-there. And that’s kind of its saving grace. Things grow very dark – and violent – at the end, so having the rest of the film be so bananas takes the edge off. I suspect the Helms brothers might be going for some larger statement here – maybe political; maybe around the dangers of greed. But if they were, I couldn’t detect it.

Mel Gibson (The Professor and the Madman) is getting a little typecast as that slightly loopy uncle no one talks about. He doesn’t stray far from that model here. You’d expect Santa to be a bit, well, jollier. But Gibson plays him like a snowbound Willy Loman; a sad-sack salaryman who’s sick of everything. Walton Goggins (Ant-Man and the Wasp) eases back into the bad-guy mode that he suits so well. Chance Hurstfield is terrifically annoying as the cold-hearted Billy. And Marianne Jean-Baptiste (Homecoming) outdoes all of them in the minor role of Ruth.

Fatman is one of those deliriously weird movies that you either “get” or you don’t. I’m afraid I didn’t, but that’s not a reason in itself to disregard it. Sure, if you’re looking for a heartwarming Christmas film, this is not it. But if you want a completely nutso ride through the strangest Santa story ever, then get your tickets now!