Marvel movies have two kinds of superhero. You’ve got your building smashers (Iron Man, Thor, Hulk) who are into saving the world. Then you have your (ahem) smaller heroes – your Spider-Man, your Hawkeye – and the eponymous Ant-Man and the Wasp. They bring a human dimension to superheroes. They may not save the world, but they will save someone important. 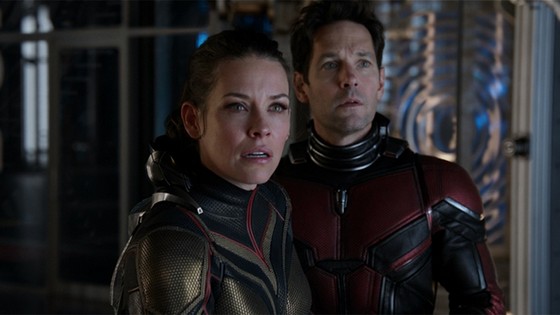 Ant-Man and the Wasp picks up from Captain America: Civil War. Scott Lang (Paul Rudd) is under house arrest thanks to his exploits as Ant-Man in Germany. That makes co-parenting his precocious daughter Cassie (Abby Ryder Fortson) a challenge. But Scott’s about to face a far greater challenge. Hope van Dyne (Evangeline Lilly) and Hank Pym (Michael Douglas) have made a breakthrough in the search for Hope’s mother Janet (Michelle Pfeiffer). You may recall from Ant-Man that Janet is lost in the “quantum realm”. But Hank and Hope have mapped out a plan to dive into the “quantum realm” and bring her back – if she’s alive. But their wildest dreams are realised when Scott receives a message from the “quantum realm”. Decked out as the Wasp, Hope busts Scott out of home detention to lead her to her mother.

The plan however requires serious black market tech, which Hope plans to acquire from shady “businessman” Sonny Burch (Walton Goggins). But the purchase of a vital component goes south thanks largely to the intervention of a mysterious outsider called Ghost (Hannah John-Kamen). Seems Ghost wants the component for herself; though just why is unclear. But then Ghost pulls a swift one and manages to steal Hank’s lab (you know, it shrinks for easy transport). Without the lab, all hope of finding Janet is gone.

Director Peyton Reed (back in the chair after Ant-Man) delivers a surprisingly complicated – but thoroughly enjoyable – superhero adventure. The writing team, led by Chris McKenna (Spider-Man: Homecoming), throw a lot of balls in the air, which Reed then has to juggle. At one point there are four different story lines going on, but Reed manages to keep things pretty much on track.

Like its predecessor, Ant-Man and the Wasp has a lighter tone than many Marvel films – certainly though in the Avengers universe. The stakes aren’t the future of the planet, so the characters and situations can be that bit funnier. Here, Reed has a lot of fun, particularly via the character of FBI Agent Woo (played completely “straight” by Randall Park), who has the task of monitoring Scott’s activities. At times though it gets pretty silly (giant ant drummers, anyone?)

As you’d expect, the SFX team works overtime. Their work on a frenetic car chase through the streets of San Francisco is a highlight. Similarly, the way Ghost is depicted is excellent. Once things delve into the “quantum realm”, things get a bit trippy; but I guess that’s to be expected. Reed even inserts a nod to that touchstone of sci-fi trippiness, 2001: A Space Odyssey. And I don’t need to tell you to stay till the very end for extra scenes which tie this film into the wider MCU.

Where the original Ant-Man traded heavily on the likeability of Paul Rudd, Ant-Man and the Wasp allows more screen time and character development to Evangeline Lilly’s Hope. She delivers an excellent turn, more than out-pointing Rudd in the likeability stakes. Michael Douglas is one more fine as the complicated Hank, and gets to verbally spar with Laurence Fishburn, who plays his former colleague Dr Bill Foster. British actor Hannah John-Kamen is also very good as Ghost; while Walton Goggins does his now-patented bad guy as Burch. Michelle Pfeiffer doesn’t get much to do, and in one memorable scene, is outdone by Rudd as herself (you’ll have to watch it to make sense of that).

I enjoyed Ant-Man and the Wasp a lot. This isn’t a film with big themes, or even very big ideas; but its modest scale and light touch are part of its attraction.