It’s hard to believe it’s been 17 years since Angelina Jolie made the role of Lara Croft her own in Lara Croft: Tomb Raider. Jolie was in her mid-twenties at that time. Now we see generational change, with 29-year-old Alicia Vikander stepping into the role. 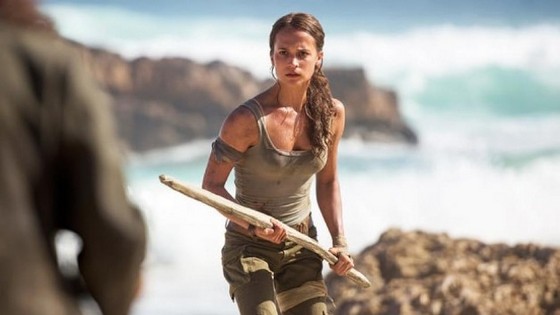 In Tomb Raider – an origin story – Lara is the fiercely independent daughter of an eccentric adventurer (Dominic West). But he vanished when she was scarcely a teen. Now 21 and without any real purpose, Lara navigates the chaotic streets of East London as a bike courier, barely making ends meet. Determined to forge her own path, she refuses to take over her father’s global empire just as staunchly as she rejects the idea that he’s truly gone. Advised to face the facts and move forward after seven years without him, even Lara can’t understand what drives her to finally try to solve the puzzle of his mysterious death.

Leaving everything she knows behind, Lara goes in search of her dad’s last-known destination. That happens to be a fabled tomb on a mythical island that might be somewhere off the coast of Japan. But her mission won’t be an easy one – just reaching the island is extremely treacherous. Once she gets there, she’ll get far more than she bargained for.

The film is peppered with touchstones from the 2013 Tomb Raider videogame – the biggest seller in the franchise’s history. The game served as a key inspiration for the filmmakers, as did the updated take on the character herself.

Roar Uthaug (The Wave) directs from a script by Geneva Robertson-Dworet and Alastair Siddons (Trespass Against Us). They in turn adapted the script from a story by Evan Daugherty (Divergent) and Robertson-Dworet.

Alicia Vikander (Ex Machina) makes for a decent kick-butt action hero and certainly looks the part. I appreciated the set-up and the conclusion, but wrestled with the way the power struggle played out in the second act. I struggled, too, with character development. For instance, I wasn’t sold on the supposedly close bond between Lara and her father, at least the way Vikander and West played it. While they spoke the words, I found its execution rather cold.

The villain of the piece Matthias Vogel (Walton Goggins) appeared to be just going through the motions. Further, the tie between Lara and drunken sailor Lu Ren (Daniel Wu) moves from adversarial to chummy in a matter of moments. Unbelievable.

I also thought some of the CGI looked fake, detracting from pivotal scenes on the island. Obviously this is a pity because those scenes were supposedly the zenith of the picture. So, Tomb Raider is strictly average fare.