I was totally overwhelmed by the grandeur, elegance and excitement in Colette – undoubtedly one of the films of the year. Keira Knightley stars as the title character, a French novelist whose provocative debut in the written word was falsely credited to her larger than life husband (a role filled by Dominic West). 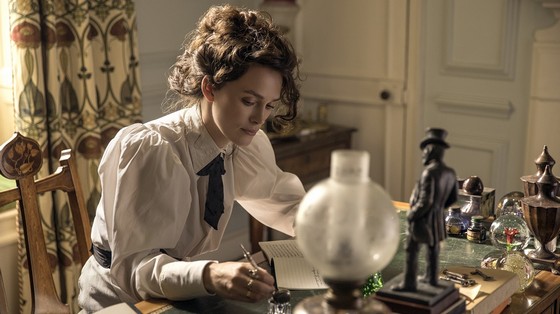 After marrying an egotistic man of letters, Sidonie-Gabrielle Colette’s (Knightley) life changes forever. That man is Henry Gauthier-Villars, known as “Willy” (West), who’s 14 years her senior. She’s transplanted from the tranquil environs of rural France to the bustling streets and flourishing salons of turn-of-the-century Paris.

Colette adapts to her new life and is absorbed into the intellectual, literary and artistic world of her husband. She struggles however to accept his extra marital affairs. Willy runs an editorial workshop, or factory, where a gaggle of ghost-writers produce fiction under his nom-de-plume. Eventually, Colette herself becomes one of Willy’s “ghosts”, penning a semi- autobiographical novel about a 15-year-old country girl, named Claudine. It becomes not only a huge bestseller but an astonishing cultural sensation, defining a new archetype of the modern age – the teenager.

Willy and Colette become the Belle Époque equivalent of a celebrity couple. Their personal lives and their sexually adventurous scandals all fuel subsequent novels. Willy, a marketing genius, uses the Claudine brand to sell ancillary merchandise – from candies to soap. But his refusal to acknowledge his wife’s authorship puts a strain on their marriage. Colette forms a relationship with a non-conforming aristocrat, the Marquise de Belbeuf or “Missy” (Denise Gough), who pushes her to claim her own artistic voice. But Willy is determined to keep his hold over her and use every psychological weapon in his arsenal to prevent her from breaking free.

Apart from the sumptuous setting and surrounds, the bravura performances and the storytelling distinguish Colette. Keira Knightley is majestic. At least one interchange near the end was positively spine-tingling. It’s very much an Oscar turn and I was suitably awestruck. Dominic West matches Knightley stride for stride in a dominant showing.

Importantly, I had no idea where the story would take me. I long for that in a film. Several dramatic high points were complemented by fun and humour. Co-writer and director Wash Westmoreland (Still Alice) has crafted an elegant and captivating work.