Melbourne writer Melissa Reeves has adapted Henrik Ibsen’s 1882 play, An Enemy of the People. It has been transposed and adapted to contemporary Australian times: 2018. It is a very faithful set of adjustments and is essentially true to Ibsen’s content and spirit – both his politics and his humour.

The original play concerns two siblings, one a doctor and the other a politician – he is the mayor of the small town. Peter Stockman, the mayor, has taken in his brother, Thomas and his family, on their return to the town and has found him a job at the local health spa. It has become the major investment for the town’s future as a tourist attraction. Thomas Stockman, unfortunately, finds that the water is contaminated with toxic base metals and calls for the Spa be closed down. The clash between the commercial interests of the town and the truth speaker of collateral damage that may manifest, become the principle centre of the play’s moral debate. 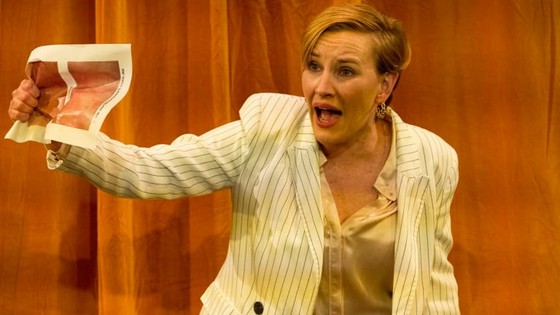 In this adaptation, the two siblings are now a brother and sister. Dr Thomas becoming Dr Katherine (Kate Mulvany). She has a daughter in tow – Petra (Nikita Waldron), a young school teacher with some feisty contemporary principles and challenges. As well, there is, in the house, a cleaner, Randine (Catherine Davies) – an invented character that argues a Reeves’ interest concerning the ‘class war’ and the pathetic ignorance of the Australian ne’er-do-well middle classes. It is an authorial burden that the play need not have borne – but there it is. (Ms Reeves was part of the team of writers on Who’s Afraid of the Working Class – 1998).

Ranged against the truth of Doctor Stockman’s discovery are the Small Business Association, represented in the play by Aslaksen (Kenneth Moraleda); the sensation-seeking and ambitious media, Hovstad (Steve Le Marquand), his assistant, Billing (Charles Wu), all led by the mayor Peter Stockman (Leon Ford). Further pressure is applied from kin of Katherine’s, Morten Kiil (Peter Carroll), who is the owner of the mill that has been the probable cause of the poisoning of the water sources. It leads to a riveting town meeting, where the arguments are thrashed about with rancour, bullying and near riot, and culminates in the destruction of the ‘whistle-blower’ with a personal physical and emotional victimisation of Katherine and her family.

The play is rendered in five scenes as the original is, and besides the many political issues of the original play has added a few more. There is, however, a lightness of touch in the writing and, especially, in the playing of the material. No character lacks a virtue or more, and no character lacks a vice or more. It is a very (wryly observed) human struggle between siblings, family and the demands of successful capitalism at all costs over moral (and health) principles – with the expedient short term view dominating and taking charge of the decisions of the community. This version of the play trusts Ibsen and reveals it contemporary relevance with ease, keeping his mordant sense of humour, of the ‘ridiculous’ of the (small, petty) human becoming transparent under pressure.

We have seen the issues in films like Spielberg’s Jaws, way back in 1975, and certainly in the world’s response to the possible disaster of human-induced climate change in the parliamentary theatre. Nothing much has changed.

“What? What do I have to give up to get what I want? Do I really want to give up what I have, my life style? It’s not my problem. I’ll be dead when it fully manifests. Burn some more coal to supply my energy cheaply! I’m flying around the world soon: Los Angeles, New York, London, Paris, Berlin, and some of those exotic and cheap holiday destinations in East Asia. I love to be pampered. South America just too expensive to get to. Am I missing much? Maybe.”

Director Anne-Louise Sarks, keeps the play bustling along and has a leading lady, Kate Mulvany, with the intelligence, wit and skill dexterity to give the audience an almost effortless confrontation with some serious contemporary issues. The audience is not weighted down with the importance of the material but, contrarily, are enhanced with a buoyant feeling of hope. Ms Mulvany manages magnificently the comedy and balances it smartly with her enraged passion in the Town Hall clash. Having Doctor Stockman a woman adds a dimension of the pertinence of the #metoo movement to its power. Ms Mulvany is in the midst of a particularly rich creative spurt, what with her adaptation of Ruth Park’s novels for the STC production of The Harp in the South and this – a treasure to be seen. 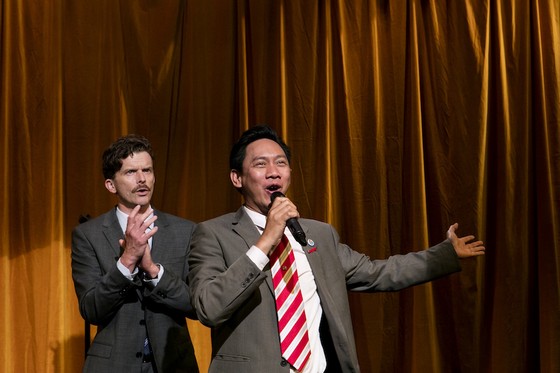 Leon Ford accounts himself well, while Kenneth Moraleda, especially, negotiates the cynical, almost caricature drawing of the ‘villains’, of Aslaksen, with finely judged choices. Not all the other actors have the same finesse to humanise their tasks beyond almost ‘cartoon function’.

The set design, by Mel Page, with a dominating glass box that requires the actors to wear ‘machinery’ over part of their face and have a misshapen back side (the batteries) to make microphone projected noise when they speak their dialogue in it, that makes the actors sound as if they are communicating through a tin-can along a piece of string, is a failure of imagination, creating an obfuscating vocal issue of craft deliveries that interfere with the subjective belief in the actor’s creations. The contrast between the natural voice and this other is obvious and is kind of boring to have to endure again (STC’s Cloud Nine, was similarly marred.) The grandiose score from composer, Stefan Gregory, was humorously appropriate and was much appreciated, while the relatively bland lighting design of open whites from Verity Hampson gave the production a clean perspective without fussy distractions.

I enjoyed this production of An Enemy of the People very much. Melissa Reeves’ approach to Ibsen’s craft and ideas was, for me, a great relief and reward. While Kate Mulvany, at the moment, does not seem to be able to do much wrong.

An Enemy of the People is playing in the Upstairs Theatre, Belvoir St, Surry Hills till 4 November 2018.