It’s amazing to think that only 400 years ago, common thought was that the Earth was the centre of the universe and that the planets and stars went around us. Despite all the scientific knowledge amassed since then, it’s a pity that some people still regard themselves as the centre of the universe! You may know some of them? This production of Life of Galileo has all the ingredients for first class audience entertainment. It’s educational, challenging, informative, dramatic, humorous, colourful and thought-provoking. There’s even near-nudity! And it’s topical, with relevance to many current hot issues such as climate change, privacy and freedom of expression. 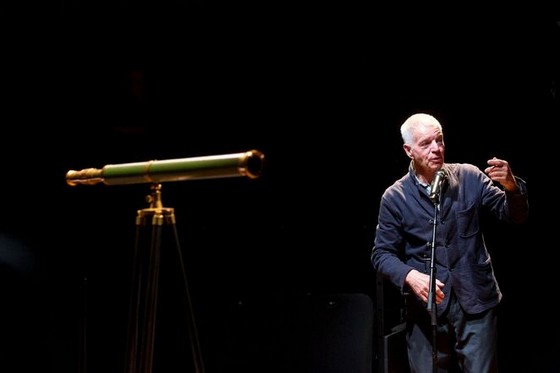 The play is presented ‘in the round’ with just a plain centre-stage with strip lighting around the edges. The creative team have excelled themselves by generating maximum mood effects with a minimalist approach. An outstanding feature is the wind-down solar system during Galileo’s tutoring scenes.

Life of Galileo was a work in progress for its writer Bertolt Brecht, with three versions appearing between 1938 and 1955. The Belvoir production is an adaptation by Tom Wright. It’s a condensed form of the original and the production has a subtle Australian style to it. Accents are local, mannerisms are cheeky, and I detected a healthy irreverence to stifling traditions and pompous power figures.

The play is an incisive portrayal of Galileo’s life in the first half of the seventeenth century. We see him delight in sharing knowledge as a tutor; his amazement at the celestial revelations provided from his simple telescope; his confrontation with the Church; his natural fear of the Inquisition and subsequent house arrest. Four locations are referenced, each one representing the influence they have in Italian society. Padua is the intellectual hub; Venice the home of commerce; Florence is where art flourishes and Rome is the seat of power.

The manner in which the story unfolds is delightfully ingenious. It’s as if all the key characters have been transported to current times. They use modern references in speech, merchants dress in business suits, the Grand Duchess prances like a pop diva and the Pope commands superstar status with the crowds.

Despite the abundance of humorous dialogue, there is the undercurrent of serious drama taking place. Galileo’s discoveries turned conventional wisdom upside down and challenged the Church’s authority over societal beliefs. It’s a contest between truth versus facts; religion versus science. The stakes are high, and lives can be lost. In frustration, Galileo exclaims “Truth never gets invited in, it has to knock the door down”. A friendly cleric tells Galileo that Rome needs to “drain the swamp”. And when Ludovico cancels his engagement to Galileo’s daughter, Galileo retorts “The phases of Venus doesn’t change her arse”. 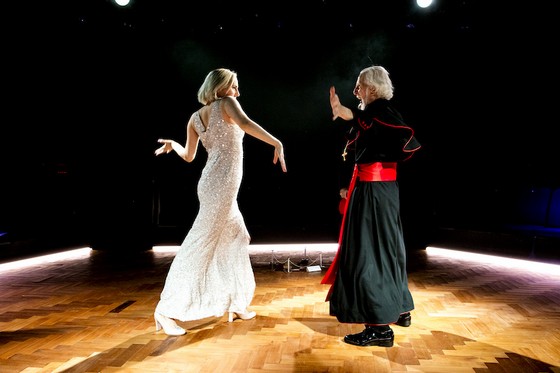 Life of Galileo is an absolute talent-fest under the direction of Eamon Flack. Heading the cast is Colin Friels as Galileo. He brings a natural ease and likability to this interesting character. Peter Carroll as Barberini had real stage presence. The scene of him being dressed whilst deliberating the fate of Galileo was remarkable. Sonia Todd was a terrific Vice-Chancellor and Miranda Parker played the bold as brass Grand Duchess. The remaining cast of Damien Ryan, Damien Strouthos, Rajun Velu, Vaishnavi Suryaprakash and Laura McDonald were splendid.

There is something for everyone in Life of Galileo. All ages should enjoy it as an example of a great, all-round theatre event.