A self-proclaimed daydreamer, Vivienne Westwood came from humble beginnings in the north of England. She arrived in London at age 17 during the swinging sixties. Her life changed course dramatically when she met Sex Pistols’ manager and impresario Malcolm McLaren. Their Kings Road shop launched punk and revolutionised popular culture. 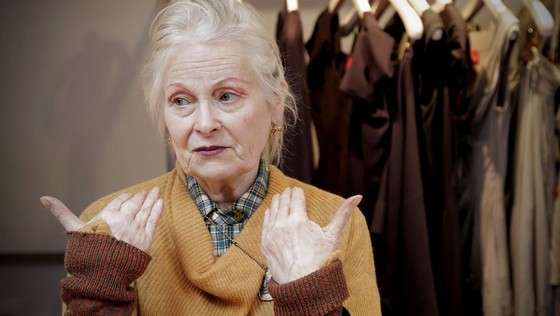 Over the next 40 years Vivienne persevered through failed relationships, personal vendettas, the mockery of the press and financial hardship. She endures as a British cultural icon and global fashion phenomenon. Today Westwood sits alongside Gucci, Dior and McQueen. But what’s unique about Vivienne is that she is the only namesake who still owns and runs her empire; and at 76, shows no sign of slowing down.

We join Westwood as Vivienne opens flagship stores in Paris and New York. What starts as a celebration of the brand across its busiest year soon becomes more complex, as we see that global success comes at a price. Amid the successes, the conflicts and the insecurities that she faces today, we skip back to key moments in her life.

After making a fashion film and a series of short films for a Vivienne Westwood collection, director Lorna Tucker suggested the idea of a feature documentary – and so Westwood: Punk, Icon, Activist was born.

This scatter-gun documentary portrays Westwood as creative, colourful and kooky. It’s difficult to make sense of what fits where. The time lines are all over the place. Husbands, divorces, a long-lived partner who now appears to be calling most of the shots. It would have been far better if the doco was told in a linear fashion (pun fully intended). In that way, the audience could follow a cohesive time line.

Pardon my irreverence, but the picture I formed of Westwood is that she has a few screws loose. Much of the time she doesn’t seem to know what’s going on … and certainly doesn’t care for being interviewed. And precious few interviewees give us great insights into Westwood and what makes her tick; let alone Westwood herself. Westwood’s activism isn’t referenced until very late in the piece. Why?

A documentary about such an iconic trailblazer should have been far better. Instead of digging deep, Westwood gives us surface gloss. I felt let down.