Some names need no introduction. And when it comes to the world of fashion, Pierre Cardin is one of those. But what’s behind the name motivates filmmakers P. David Ebersole and Todd Hughes in their documentary The House of Cardin. This reverential doco sources both archival footage and contemporary interviews, including with Cardin himself (he recently turned 98 and is apparently still going strong). But its scattergun approach to the subject may prove challenging. 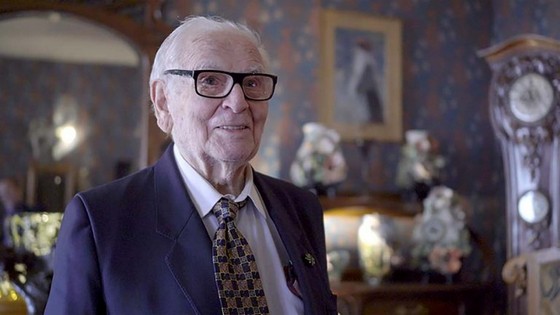 The House of Cardin unearthed many surprising (at least for me) aspects of the fashion icon. Like the fact he wasn’t born French (he was born in Italy). Or that he owns the Maxim’s restaurant chain. Or that theatre is his personal passion. More importantly though, it also delves into the psychology of one of the most successful creative thinkers of all time.

Ebersole and Hughes adopt a thematic approach to the material. After some brief background about Cardin’s early life, they jump from his fashion to the myriad other aspects of life and career. His design aesthetic, entrepreneurship, work-a-holism, love of theatre, relationships, and more all get a run. They decline to present a neat linear narrative from birth to now. I found the result both refreshing and a little confusing as the film jumps back and forward in time.

While Ebersole and Hughes otherwise stick to conventional documentary techniques – talking head interviews, archival footage and contemporary observation – The House of Cardin maintained my interest. Its economical 95-minute running time no doubt helps with that. But more importantly, by the end I understood what made Cardin so great. So if (like me) you’re a bit of a fashion philistine, this film should provide some new insights. I will say though, for fans of the retro, it serves up vision of some particularly groovy ’60s and ’70s fashion.

The cast of interviewees ranges from models who worked with Cardin in the 1960s (many of whom I’d never heard of) through to household names like Naomi Campbell, Sharon Stone and Alice Cooper (!).

Cardin obviously worked closely with the filmmakers on the project. As a result, its independence might be questioned. Although the doco hints at some darker elements of its subject and his empire, it never chases them down. The result is therefore an intriguing but perhaps sanitised portrait of the fashion icon.

Despite not being a huge fan of either fashion in general or Pierre Cardin in particular, I found The House of Cardin to be an enjoyable and insightful documentary. While it’s not the easiest film to follow, and maybe a little too deferential to its subject, it’s nonetheless a must for anyone interested in contemporary fashion, design or corporate branding.