The Overcoat is a new Australian work – a musical – by Constantine, Michael and Rosemarie Costi – based on the eponymous Nikolai Gogol short story from 1842. The literal translation used is by Alena Lodkina. Gogol seems to be the parent to a writer like Kafka and his more familiar concerns.

In this version of the story, Nikolai, an overworked and teased copy clerk in the byzantine Russian Civil Service, becomes obsessed with the acquiring of a new overcoat. The overcoat is beyond his means, but not beyond his want. In affording it, Nikolai experiences much deprivation, and, unfortunately, has it stolen, sending him into shock, into a fever which, ultimately, causes his demise. 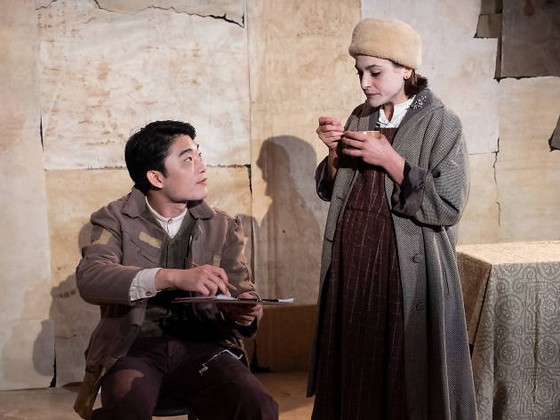 The score by Rosemarie Costi has its inspiration origins in the use of jazz. This creative trio claims jazz is an urban sound and “a form that captures both the stifled cry of the melancholy, and the endless hum of the insomniac streets”. A trio – Sarah Evans (double bass), Josh Willard (saxophone) and Tate Sheridan (piano) – unfold the inspired score with skill and yearning.

The story is told in song and long stretches of dialogue. Four performers: Laura Bunting, Kate Cheel, Aaron Tsindos and Charles Wu, carry the responsibilities. Mr Wu, gives an enchanting, sensitive and meticulous performance as our hero, Nikolai – it’s a very moving centre to the relative success of the entertainment. Aaron Tsindos gathers some seven characters to erudition. But, it is in the under-casting with Kate Cheel and Laura Bunting, that the work stumbles with an imprecision, nervousness and under-powered vocals. Clarity and surety of demarcation in the creation of the many characters that they have responsibility for needs much more attention to be convincing and keep an audience suspended in belief.

Emma Vine has created a design that has the weight and flexibility for the many locations required in the story telling, assisted by very beautiful graphic signage to designate the where we are. The overcoat itself lacks the detail of the short story and is a relative disappointment in its appearance, for the impact of the story to have the stakes of the catastrophic developments to be realised. Alex Berlage has created a detailed and sympathetic lighting design as support for the atmospheres and story development.

Michael Costi has changed the famous name of the hero of this famous story, from Akaky Akakievich to Nikolai (the author’s name) and quizzically has removed the coda of ghosts at the end of the Gogol tale that gives the original so much poignancy. It feels odd and arbitrary, to have chosen such an iconic work and then to undo one of its greatest moments. 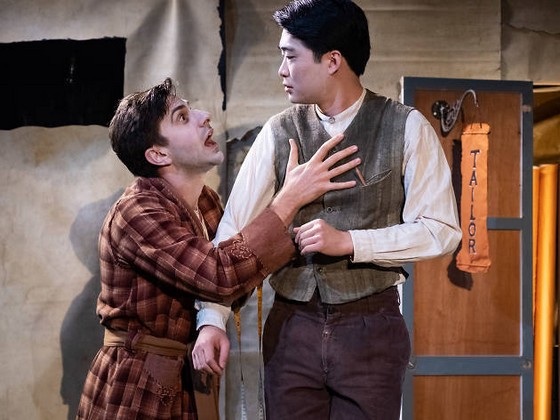 Constantine Costi, the director, other than in the guidance for two of his actors, has a vision for the aesthetics of the work and presents it in a very confidently conceived manner if not sometimes flubbing it in execution. This 25A program is intended as an opportunity for the development of new work. The Overcoat as it is, is worth seeing. Its further iterations, will I hope, benefit from this necessary exposure.

The Overcoat: The Musical (part of the Belvoir 25A Program) is showing in the Downstairs Theatre, Belvoir Theatre, Surry Hills until 1 December 2018.