Under the pseudonym Dr Seuss, Theodore Geisel wrote over 40 books. He’s one of the best-selling authors of children’s books ever. Many of them have provided material for the screen. But live action versions of Seuss’s tales are a bit of a mess, as demonstrated by the awful 2003 film The Cat in the Hat starring Mike Myers. Animated films like Horton Hears a Who and The Lorax have been much more enjoyable and have captured the essence of Seuss’s creations. 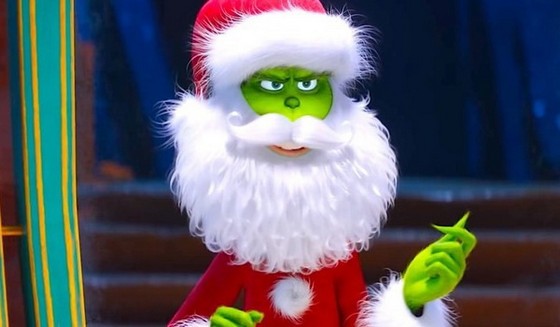 The Grinch is based on the rather thin 1957 book How The Grinch Stole Christmas, about a green grouch who plans on ruining Christmas for the good folk of Whoville. It was previously filmed in 1966 as an animated short directed by Chuck Jones and narrated by Boris Karloff; then again in 2000 by Ron Howard as a live action feature starring a manic Jim Carrey as the grinch. This third version gives us another animated take on the familiar story, and it seems as if animation is the best way to bring the character to the screen. The Grinch comes from Illuminations Studios and is the ninth feature from the creative force behind Despicable Me and the cute minions.

Here Benedict Cumberbatch (Dr Stange) voices the character of the titular grinch, and he does a superb job. Cumberbatch’s gruff sniggers and mean-spirited putdowns suit the character perfectly. He lacks the nasty streak that Carrey brought to the iconic character. He’s sarcastic, and his one-liners are amusing, but he also brings an emotional depth to the character that was missing from Carrey’s interpretation.

He lives atop Mt Crumpet, isolated from the cheerful folk who live in Whoville, whom he despises. His only companion is his faithful dog Max, who is more of a servant than pet. The grinch only ventures into town when he needs to buy provisions. But he hates Christmas even more – never having known a family, he experiences loneliness at Christmas and can’t enjoy the holiday.

But one Christmas he has to travel into town to buy provisions and is immediately struck by the joyous tone of the festivities: the singing and the lighting of the giant Christmas tree in the town square. Sickened by all the colour and glitz, he sets out to ruin the holiday for everyone else. He decides to impersonate Santa Claus and take down all the decorations and steal all the presents. But then he undergoes a change of heart after meeting the perky, high-spirited Cindy-Lou (Cameron Seely), a sweet natured young girl who only wants Santa to make life easier for her hard-working single mother.

Michael LeSieur (Keeping Up with the Joneses) and Tommy Swerdlow (Cool Runnings) adapt this version of The Grinch for the screen. They’ve distilled the essence of the story. But they’ve also stretched the thin 60-page tome out to nearly 90 minutes with some extra padding and subplots.

Former animator Yarrow Cheney (The Secret Life of Pets) directs; in collaboration with and Scott Mosier, a former producer for Kevin Smith, making his feature directorial debut here. The film’s moral messages about the importance of family, friendship, kindness and inclusion at this festive time will resonate strongly with older audiences. Younger audiences will love the colour, the inventive visual gags and the slapstick humour. The CGI  design for the town of Whoville itself is quite striking, creating a veritable winter wonderland.

Cheney and Mosier have assembled a strong ensemble vocal cast to bring the other characters to life. Singer Pharrell Williams provides the rhyming voice-over narration as well as supervising the seasonal music choices for the soundtrack. Danny Elfman provides his usual bombastic score. The vocal cast also includes Rashida Jones as Cindy Lou’s mother; Kenan Thompson as the optimistic Mr Bricklebaum, who outlandishly decorates his house; and Angela Lansbury as the town’s mayor who orders that Christmas celebrations this year be bigger than ever. Hip-hop artist Tyler The Creator brings a grittier take to one of the more iconic songs You’re A Mean One, Mr Grinch.

This new animated version of The Grinch is perfect family-friendly viewing for the upcoming holiday season.