A number of recent movies have explored the strong connection between man and dog. Films like A Dog’s Purpose and A Dog’s Journey have been entertaining and heart-warming examples of this sub-genre. And now The Call of the Wild fits comfortably into this popular niche. This is the sixth screen version of Jack London’s classic adventure story about the friendship between a dog and a man and their adventures in the Yukon wilderness. London’s story, which was written in 1903 and has never been out of print, has also inspired many other similar films, such as White Fang and the animated Balto. 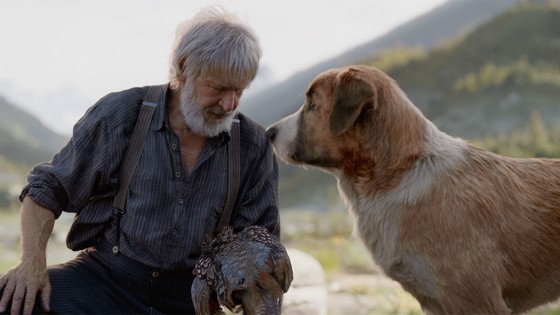 Buck is a domestic dog that is kidnapped and shipped off to the wilds of the Yukon during the feverish Klondike gold rush of the 1890s. He is beaten by some cruel owners. Buck also crosses paths on several occasions with reclusive prospector John Thornton (a perfectly gruff and grizzled Harrison Ford), who seems to form a strong connection with the dog. Buck becomes part of a sled team, under the care of Perrault (Omar Sy) and Francois (Cara Gee), a kindly pair who deliver the mail to the remote mining town of Skagway. Buck is quick to learn and adapt, and soon assumes leadership of the sled team.

But when the telegraph makes the sled delivery service redundant, Buck and the dog team are sold off to ruthless prospector Hal (Dan Stevens) and his sister Mercedes (Karen Gillan). When Hal drives Buck and the team into danger, Buck is rescued by Thornton, and the loyal dog becomes his companion when they settle into an abandoned cabin.

Unlike previous versions which have concentrated more on the character of Thornton (mainly because of the problems of working with real animals) this version spends more time with Buck and his story. This is because the central character of Buck, a rambunctious St Bernard/Scotch collie mix, has been largely augmented by some state-of-the-art CGI animated effects and 21st century technology. However, he still has a real personality and screen presence that comes across. Buck has been given some real emotions through the motion capture performance delivered by Cirque du Soleil performer Terry Notary, who played a memorable role in Ruben Ostland’s bizarre 2017 drama The Square.

The Call of the Wild is the first live action feature directed by Chris Sanders, who is best known for his work on animated films like How To Train Your Dragon. His animation background stands him in good stead here to ensure that the animation techniques that bring Buck and the other animal characters to life in photo-realistic fashion, that is more convincing and emotionally engaging than the recent live action remake of The Lion King.

Sanders and Oscar-nominated screenwriter Michael Greene (Blade Runner 2049) give the material enough emotional substance that we soon forget we are watching a CGI created animal. Younger audiences will enjoy the early antics of Buck as he runs amok through a house, although some scenes of animal abuse may be a bit too strong for them even though they have been toned down.

The role of the world-weary and reclusive Thornton, who has retreated from civilization following a tragedy that tore his family apart, has previously been played by the likes of Clark Gable, Charlton Heston and Rutger Hauer in a made for TV adaptation. But Ford brings a warmth and sense of compassion to his performance. He grounds the film with his sense of gravitas and iconic presence. Ford also provides the voice over narration for the film. Stevens is a bit of a cliched villain, given little depth.

The Call of the Wild is a crowd-pleasing family friendly adventure with strong visuals and an expressive CGI dog with a winning personality that will appeal to youngsters. This is a family-friendly Disney-like tale that will appeal to audiences of all ages. The themes of greed, regret, redemption, freedom, family, resilience, grief, responsibility and leadership will resonate strongly with adult audiences.