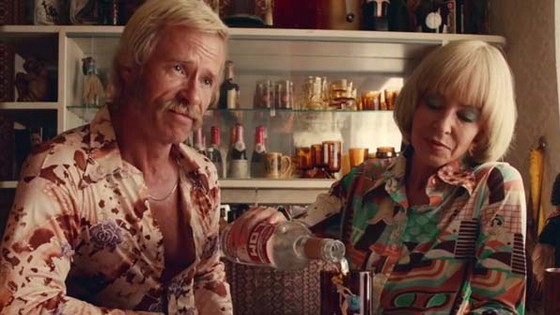 It’s the 1970s. Fourteen year-old friends Jeff (Atticus Robb) and Melissa (Darcey Wilson) discover a 200-ton blue whale washed up on their local beach. To them, it’s the biggest thing that’s ever happened in Australia. But it’s not nearly as big as what’s about to happen behind the closed doors of their quiet suburban cul-de-sac. Their parents are preparing to join the sexual revolution (a decade too late) by throwing a key party (you know the one, where they chuck their keys into a jar and end up changing partners). Not surprisingly, it all goes spectacularly wrong.

The quintessentially Australian cast is headed by Guy Pearce and Kylie Minogue (who worked together on the long-running TV soapie Neighbours back in the day). Radha Mitchell and Julian McMahon, along with Asher Keddie and Jeremy Sims, join them to make up the three couples on their wild swinging safari. Jack Thompson is cast as the local Mayor.

Swinging Safari is an abomination. It’s appalling and readily fits into a list of my worst 10 movies of the past decade. The extra shame here is that the man behind it brought us genuinely funny Priscilla. Mind you, that was 24 years ago.

The film’s only redeeming feature is the liberal use of clothing and devices used in the 1970s. As a time warp, it’s fine. Beyond that, it’s an unmitigated disaster. What purports to be a comedy isn’t humorous in the least. The thin story line takes ages to get going, never ignites and is extremely boring.

The deliberately exaggerated acting is hideous. Decent actors disintegrate before our eyes. Dare I suggest, they are awfully miscast. Just what were they thinking? Perhaps it looked good on paper; although I can’t see how. I can only imagine Elliott must have had a bunch of sycophants around him . Surely someone – anyone – could have told him to scrap the script and start channeling the ‘70s some other way. Who thought – spoiler alert – a storyline in which parents encourage two naïve 14-year-olds to have sex would be a good idea?

Five minutes in I wanted to leave and that feeling never left me. It was tortuous to sit through. The only reason I give it any score is because Swinging Safari did manage to recreate the ‘70s vibe, so it gets a 1 out of 10.