Maze Runner: The Death Cure concludes the generic dystopian saga based on the popular series of novels written by James Dashner. And unlike a couple of other YA adaptations, at least here the producers resisted the temptation to split the final film into two parts.

We were first introduced to a group of heroes, known as gladers, in The Maze Runner (2014). They were mysteriously abducted and dropped into the centre of a glade (hence the name). There they confronted a shape-shifting maze that contained a variety of deadly challenges. In the second film, subtitled The Scorch Trials (2015), the gladers faced a new menace unleased by a global pandemic known as the Flare Virus. The virus turned large sections of the population into zombie-like creatures known as cranks. These cranks pursued the gladers across the devastated landscape. The gladers also learned a sinister quasi-government research agency known as WCKD (which is an anagram for the unwieldy World In Catastrophe: Killzone Experiment Department) was experimenting on them. Seems WCKD were hoping to find out why they were immune and use their blood to develop a cure. 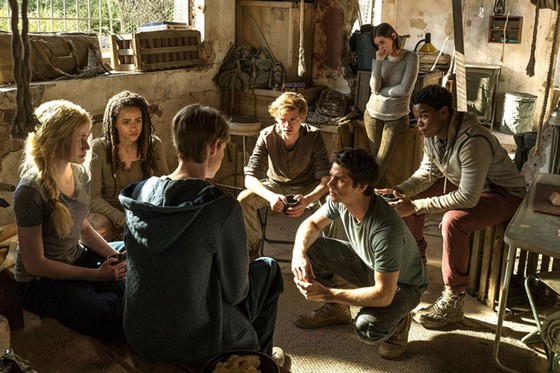 This third instalment in the series takes up the story a few months later. The gladers and the rebel army led by Vince (Barry Pepper) take the fight into the walled enclave known as the Last City, which houses WCKD’s towering HQ and its laboratories.

Thomas (Dylan O’Brien), Newt (Thomas Brodie-Sangster) and Frypan (Dexter Darden) have been trying to rescue their friend Minho (Ki Hong Lee) from the clutches of WCKD. The film opens with an excitingly constructed set-piece: a high-speed raid on a train. This will have audiences recalling Mad Max: Fury Road, one of the best out-and-out action films of the past decade.

Once the dust settles, the gladers, with the help of resistance fighters Brenda (Rosa Salazar) and Jorge (Giancarlo Esposito), enter the Last City. Thomas comes face-to-face again with the turncoat Teresa (Kaya Scodelario), and meets up with his former nemesis Gally (Will Poulter) who was presumed dead.

Along the way they also free 28 other imprisoned teenagers. However, they never stop to question the morality of their mission, which seems to put these 28 teens ahead of the rest of humanity that WCKD’s scientists are supposedly working to save.

Once again, T S Nowlin provides the script. While it remains fairly faithful to the source material, he’s beefed up the action quotient here. Regular director Wes Ball, who has been with the series from the start, again takes the helm. With each instalment though, the series has moved further away from the early concept of the maze and its challenges. It’s become more or less another variation of those other popular YA adaptations like Divergent and The Hunger Games.

Ball, a former visual effects supervisor, handles the action proficiently enough here. He maintains a kinetic pace throughout. He stages several exciting and well-staged set pieces and lots of pyrotechnics that dwarf anything else in the series. Paul Harb and Dan Zimmerman deftly edit it all together. Gyula Pados’ widescreen cinematography is also a plus, adding to the slick look of the material.

However, the overlong climactic battle sequence seems both cliched and exhausting. It’s also surprisingly violent for a YA novel. The special effects that create the scorched earth as well as the glittering futuristic city are quite impressive.

The young cast acquit themselves well. O’Brien recently showed his action chops in the recent American Assassin, which was actually filmed after this. He handles the physical stuff convincingly enough. He also brings strong emotional conviction to his performance.  Patricia Clarkson though is largely wasted as the evil head scientist Ava.

Game of Thrones’ star Aidan Gillen is menacing as Janson, the head of security. Janson is a one-dimensional villain, but Gillen relishes the opportunity to chew the scenery here. Walton Goggins (from the TV series Justified) is also wasted in a fairly thankless role as the ghoulish and heavily disfigured leader of a resistance movement.

Even though Ball does a good job of maintaining the momentum and injecting plenty of action, the film is a little generic. And it does seem a little overlong at 142 minutes. Numerous romantic entanglements and subplots unnecessarily add to the uneven pacing of the middle sections. Nonetheless this is easily the best film in the series, and brings the saga to a satisfactory conclusion.