The tyrannies of distance and language prove no barrier for Sims. And when you think about it, maybe Australia and Iceland have quite a bit in common. Both countries are isolated, but boast harshly beautiful environments. We both enjoy democracy, universal health care and Bjork. And, of course – sheep. While Iceland’s industry is much smaller than Australia’s, it has a long and proud history. So transporting a film (ostensibly) about sheep from snowy northern Europe to sunny Western Australia doesn’t seem like such a big stretch after all. 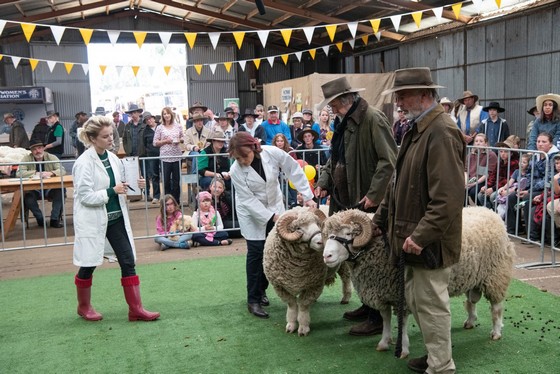 Like its progenitor, RAMS focuses on two brothers. Colin (Sam Neill) and Les Grimurson (Michael Caton) live on adjoining properties in WA’s Mt Barker region. If you’re not familiar, it’s near Albany on the southern tip of WA. The brothers however haven’t spoken in 40 years. But both also breed rare Dorset horn sheep – a variety uniquely suited to Mt Barker’s micro-climate. At the annual show, Les’s ram wins the top prize. But after the show, Colin suspects something might be wrong, and confides in local vet Kat (Miranda Richardson). Les initially dismisses Colin’s concerns as sour grapes. But he soon has to face the fact that his sheep have been infected with a deadly disease.

The Department of Agriculture – represented by the officious De Vries (Leon Ford) – soon steps in. There can be only one outcome – all the sheep in the region have to be slaughtered. Despite financial support, this comes as a crushing blow to the farming community. Residents start selling up. Les decides to resist, but his efforts come to nought. Having lost his flock, the combustible Les (who was probably already an alcoholic) descends into a spiral of despair. Colin also wants to resist – but be smart about it. He devises a cunning plan to thwart the Department, and keep the heritage breed alive in the region.

If you can’t guess that the estranged brothers will somehow be brought together, well you probably haven’t watched enough movies. But while the emotional arc might be fairly obvious, the film ends up being hugely entertaining. Screenwriter Jules Duncan cleverly incorporates a distinctly Australian sensibility into Hákonarson’s story. It also (coincidentally) taps into something of the tension between personal liberty and public safety currently playing out in some places. Sims (Last Cab to Darwin) brings it to the screen with a light touch. Despite the occasional heavy moment, he manages to find the quiet humour in the characters and their situation.

Although I was a bit reticent at first, I ended up thoroughly enjoying RAMS. At this troubled time, it gave me hope for the future of cinema in this country.