Written by Perth playwright Andrew O’Connell, Professional Premises is a one sitting piece that offers no relief from some very nuanced sparring between three very intense characters. An observational work that relies on what is both being relayed and what is being witnessed by the third character not currently engaged, the focus of the (in close vicinity) theatre goer never knows quite where to settle. 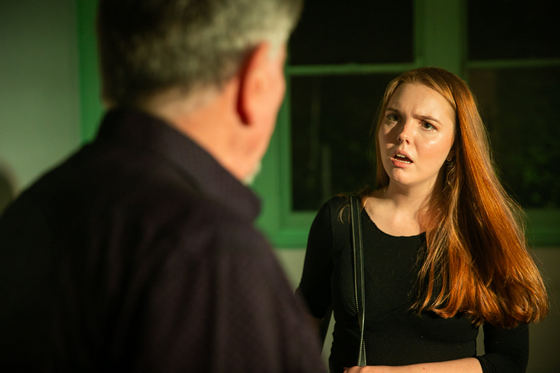 Director Malcolm (Jeff Watkins) would seem to have as much to prove to himself as to the two actors in the room he is tasked to oversee.  Employing a hands off style of directing that encourages his actors to ‘explore’ the stage rather than be given its definition, Mal has little clue at the beginning just how much he himself is being assessed and found wanting by veteran actor Dave (Ron Arthurs).

Dave has signed on to play Prospero in yet another re-imagining of Shakespeare’s “The Tempest”, and it is with young actor Lindsay (Lauren Beeton) that Dave turns up twice a week to meet with and run his on-book lines under the acerbic command of Mal. Suspicious of just how much slips past Mal, Dave eventually turns the after rehearsal chat with Lindsay into something a little more inquiring.

With only two months to go before the play opens, the pressure is on the three to either find a way to cope with increasing distrust or to throw off the veils and discover why it is that Mal is such an over dissector in some ways and remarkably casual in others.  Mal will not take ownership of the play, and for someone who relies solidly on his own notes, Mal is curiously disjointed as to which direction he wishes the actors to take his suggestions.

Comparing notes with my theatre buddy, we agreed that the intent of Professional Premises was not always clear.  It is a pressurized work as there is no offstage time; the three actors are in close quarters for the duration.  The increasingly tense dynamic between the three ebbs and flows around the character of Lindsay, as she reads for Prospero’s daughter Miranda, and as she is increasingly drawn into the crossfire between the two men.

Thematically aligned with the tragi-comedy premise with which Mal regards The Tempest, there is just as much code cracking needed to be applied to Professional Premises.  There is an upheaval and it is increasingly evident that there needs to be a calming of the storm (also, this is the scene of The Tempest that is read over and over during the play) before the production is potentially de-railed.  With some jet packing, the three remaining standing at the end, but none are the same people who started rehearsing two months prior to curtains up.

Professional Premises featured a minimalist set with some backlighting on the rigid postures of the actor creating silhouettes that seemed to indicate the duality of each.  Kudos to all three actors who must have been roasting as they wore jackets and jumpers etc in a very hot room!