In the shadow of the Disney World complex in Orlando, Florida, is a strip of motels catering to those on the fringes of society. One of these rather grim places is home to the subjects of Sean Baker’s The Florida Project. And while the film has been almost universally lauded, I have to say I feel deeply conflicted about it.

Baker’s previous film, Tangerine, was shot on an iPhone. It too depicted characters on the edge, and it too garnered a lot of critical acclaim. But maybe Baker has crossed a very fine line this time around. 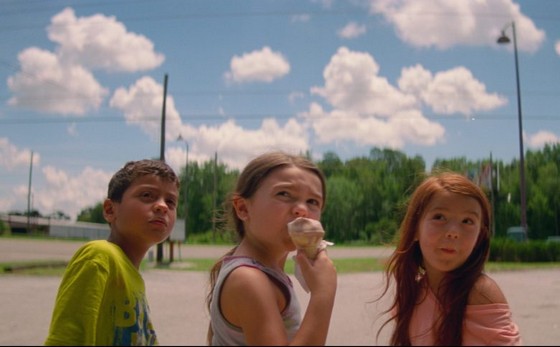 In the opening scenes, we’re introduced to 6 year-old Moonee (Brooklynn Prince). She’s a precocious moppet, but easily led astray by the slightly older Scooty (Christopher Rivera). Moonee lives with her mother Halley (Bria Vinaite) in the “Magic Castle” motel. Halley ekes out a living selling perfume knock-offs to tourists, and scamming food from her friend Ashley (Mela Murder), who works in a restaurant. But Halley’s frequent absences and irresponsible parenting mean Moonee is often left to her own devices – which in turn lead to trouble. Bobby (Willem Dafoe), the motel manager, does what he can to be a father figure of sorts to the myriad kids in the complex, but he’s constrained by his job in how much he can do.

Baker and co-writer Chris Bergoch produce a loose narrative. But the main problem I have is that the film seems to come perilously close to exploitation. And although I’m sure that wasn’t Baker’s intention, the way the film wallows in lurid details was troubling to me.

This is not an “easy” film in any sense. It’s hard to watch – sometimes excruciatingly so. Cinematographer Alexis Zabe shoots in the faux-verité style so beloved by directors but so hated by audiences. This only distances the audience from the characters. Even once I got past that, I had a lot of trouble relating to the characters, particularly the vacuous Halley. I just couldn’t find anything to like about her. And she’s not even the most odious character in the piece.

Even as a study of poverty in America, The Florida Project misses the mark. The characters are certainly trapped in a vicious cycle, but they’re far from the worst off in that society. At least they have a roof over their heads. But the film wimps out on tackling any of the underlying causes of poverty or the woefully inadequate response to it by both government and society. Instead, it wants to frolic in the “joy” of it all.

There are some compensations. Zabe provides some rare moments of beauty. The final scene almost makes up for the disspiriting 2 hours that have gone before; but even that’s as artificial and vacant as its setting.

Young Brooklynn Prince is certainly the best thing about the film. While I have a lot of problems with how her character is written, her performance is excellent. Willem Dafoe is also brilliant as the kindly Bobby. Bria Vinaite, apparently an Instagram star before this, brings an energy to Halley without providing a lot of nuance.

The Florida Project immerses audiences in many of the things that are wrong with America right now. If you want to be depressed for 2 hours, this is the film for you. But don’t think too hard about it, because ultimately this film is an exercise in style over substance.