Before The Book of Mormon, the equally delightfully-offensive Avenue Q was wowing audiences with its combination of childlike whimsy and adult issues. The hilariously vulgar puppet show features similarly skillful lyrics in its catchy soundtrack, from the upbeat sounds of “Everyone’s a Little Bit Racist” to the sentimental reflections of “I Wish I Could Go Back to College”. 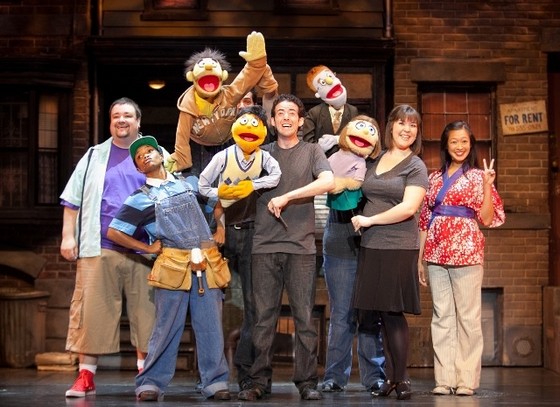 We first meet just-graduated puppet Princeton. He’s longing to find his purpose on Avenue Q, a fictional street in an outer New York borough. His neighbours include a number of human and puppet characters, from the sweet Kate Monster to the offensive Trekkie Monster (and no they are not related – you racist). As if living under the control of superintendent, Gary Coleman (Natalie Mead) isn’t enough, everyone is struggling with the challenges of life. Slacker Nicky and his best friend, Republican investment banker fusspot Rod (who is totally not gay) are having Bert and Ernie-esque roommate issues; while Princeton’s romance of kindergarten teacher Kate is shaken by skanky chanteuse Lucy the Slut. Her temptations are encouraged by a couple of bullying Bad Idea Bears.

The foul-mouthed puppets are operated and voiced by neutrally dressed puppeteers. They’re always in full view of the audience, mingling with three human actors. However, the strength of the puppet characterisation and the complexity of their unobtrusive operation mean that the audience quickly forgets about their operators. The cast delivers superb character performances. They’re clearly comfortable taking on multiple roles (and multiple puppets). Joshua Moore is particularly effective in his animation of the Ernie-esque Nicky and Cookie-Monster-type Trekkie.

The three human characters – Christmas Eve (Jordan Boyd), Brian (Matt Shield) and Gary Coleman (Natalie Mead) – integrate and interact with the puppets easily. Mead, in particular, nails the sarcasm of her Gary Coleman both vocally and physically. William Toft and Kate Routson are lovely together as protagonist couple Princeton and Kate Monster. Routson’s sweet vocals suit the pure sunshine of her idealistic puppet character and her Act One closer, “There’s a Fine, Fine Line”, in which she responds to commitment-phobic Princeton’s panic with a vow to no more waste her time, serves as a wonderful illustration of this.

As with its format, the show’s colourful staging serves as a tribute to familiar children’s shows with a Sesame Street-style sidewalk. But familiarity with the homage isn’t essential to the entertainment value of the show. Similarly, dated jokes of a time when the internet was only on desktops and Gary (what-you-talkin’-about-Willis) Coleman was still alive still come across as funny. Clever details also add visual interest throughout, while some details (cue extended puppet sex scene) can never be unseen. 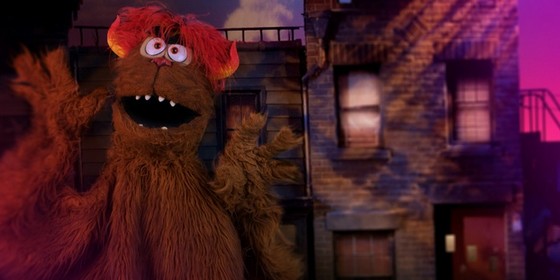 Despite its raunch, from the magical opening number there’s a warmth to Avenue Q. And it seems that it’s a combination that right up Brisbane’s street, with the loveable furry friends making their fifth and final (for now) outing as one of Brisbane Arts Theatre’s biggest hits. As winner of the ultimate Tony Award trifecta (Best Musical, Best Original Score and Best Book) the irreverent show is an engaging must-seem perfect for the whole family… if you are okay with your kids seeing full puppet nudity, hearing naughty words and witnessing a furry sex scene. See what the fuzz is all about again at Brisbane Arts Theatre until 22 December 2018.