Steve McQueen blows up the heist movie with Widows. Then he picks up the pieces and puts them back together with an Allen key. This fascinating jigsaw of a movie is definitely not what you might expect, but it’s also one of the most intriguing films of the year.

It’s almost like McQueen decided to re-make Ocean’s Eleven; but then made it about everything that’s wrong with America. Widows turns a withering glare on America’s contemporary ills – racism, sexism, gun culture, greed and political corruption. But it does so in a heady mix that combines crime thriller, political procedural, relationship drama and social commentary. It packs a lot in; but even then McQueen leaves tantalising traces for the audience to fill in. 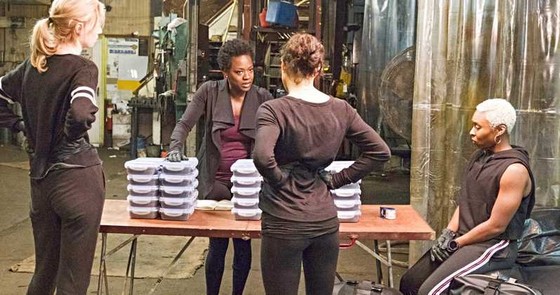 The film kicks off with a heist – one that ends badly. Harry Rawlings (Liam Neeson) leads his gang into a trap set by the cops, and they all meet a hail of bullets that triggers a massive explosion. Harry’s widow Veronica (Viola Davis) is of course heartbroken; but things get worse real quick. Seems Harry’s last job involved stealing $2 million from Jamal Manning (Brian Tyree Henry), a drug dealer turned legit. Jamal needs that money because he’s running for office against Jack Mulligan (Colin Farrell), scion of a politically connected Chicago family. So Jamal and his ruthless brother Jatemme (Daniel Kaluuya) deliver a blunt message to Veronica – she has a month to come up with the $2 million, or things will get nasty. Veronica’s driver Bash (Garrett Dillahunt) offers a ray of hope with a key Harry entrusted to him. It leads to Harry’s notebook, which details all his robberies; and plans for an even bigger one. Out of her depth but completely desperate, Veronica reaches out to two of the other widows from Harry’s gang – Linda (Michelle Rodriguez) and Alice (Elizabeth Dibecki). Now the three women have only a few weeks to pull off a hugely risky job, or face the wrath of the Manning brothers.

Widows features some really audacious directorial choices. For a start, McQueen lets the movie unfold in a disconnected way. Scenes (many of them quite short) play out in isolation, with no apparent connection to the next. It’s only when enough of them have played out that the plot starts to take shape. It’s like watching someone try to solve a Rubik’s cube. It looks crazy until the solution appears. Not content with that, McQueen also uses an amped-up version of a Hitchcock technique. Much of the action plays out off-screen, leaving the viewer to fill in the gaps. And he makes great use of a related trick where events play out in a blurred background. He even crafts a couple of scenes in which characters have long conversations, but the characters themselves aren’t seen.

This really is a thinking person’s crime drama. Don’t go into Widows thinking it’s going to be another Logan Lucky. Yes, there’s a heist; but here the heist isn’t the point. McQueen is far more interested in his characters, their relationships and what their actions say about the political themes he’s exploring. It’s twisty, it’s complicated and it’s often brutal. It’s not going to be a light romp. The fact Gillian Flynn (Gone Girl) and McQueen adapted a Lynda La Plante story for the screenplay might give a hint to its style.

Viola Davis is magnificent as the haughty but wounded Veronica. Michelle Rodriguez and Australia’s own Elizabeth Dibecki provide brilliant support as her accomplices. In fact, Dibecki gets arguably the most complex character in the whole film. Brian Tyree Henry and Colin Farrell are excellent as the two bulls going at it in the political ring; while Daniel Kaluuya (Get Out) sheds his nice-guy image as the vicious Jatemme. Veterans Robert Duvall and Jackie Weaver both get some great – though no pretty – moments as Jack’s father and Alice’s mother. Don’t be surprised if Widows cast members feature in the upcoming awards season.

Widows isn’t an easy film. This is thoughtful, even intricate, filmmaking. McQueen is a director at the top of his game at the moment, and this film should only cement that reputation. So while some may find this tough going, I think it’s one of the best films of the year so far.