Wickedly clever with lots of droll humour, Logan Lucky is a rare treat.

Divorced and desperate for money, unemployed West Virginia coal miner Jimmy Logan (Channing Tatum) hatches a wildly elaborate scheme. He plans to rob the Charlotte Motor Speedway in neighbouring North Carolina during a NASCAR race. He convinces his one-armed brother Clyde (Adam Driver), an Iraqi War veteran now tending bar at a local dive, and his car-obsessed hairdresser sister Mellie (Riley Keough), to join him in the daring heist. The down-on-their-luck Logans however need outside help to pull off the complex robbery. Eccentric demolition expert Joe Bang (Daniel Craig) is clearly the man for the job. But there’s one catch: Bang’s incarcerated. 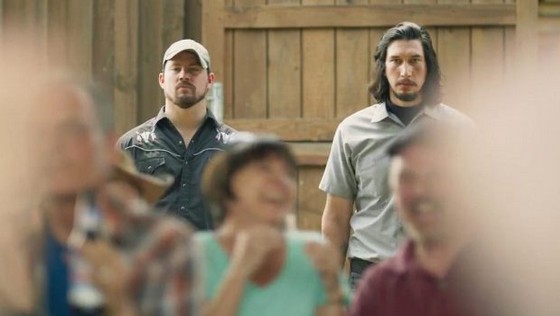 Channing Tatum (Magic Mike) continues to add favourably to his body of work. His easygoing relationship with Driver (Paterson), as his brother, is a highlight. Keough (Mad Max: Fury Road) holds her own and also impresses in the pivotal role as their sister, the only one in the family who seems to have avoided the Logan curse.

Katie Holmes (Batman Begins) bobs up as Tatum’s ex-wife; while Farrah Mackenzie is quite a find as their precocious daughter. Her character has more than a working knowledge of tools. Daniel Craig may not be flexing his muscles in this one, but he has total control over his persona as a crim with five months left to serve when he buys into the heist.

I had almost forgotten what Hilary Swank (Million Dollar Baby) looks like – it’s been so long since I have seen her in a movie. She has a relatively small role late in the piece, but is an unmistakable presence.

Logan Lucky’s ability to surprise through its offbeat shenanigans is its greatest asset. But don’t overlook the sweet direction of Soderbergh, a master of his craft. Filled with plot twists, offbeat characters and a raucous soundtrack, it scores an 8 to 8½ out of 10.