Testosterone flows in Walking Out. This coming-of-age tale involves a father and his son in beautiful American wilderness in the middle of winter. 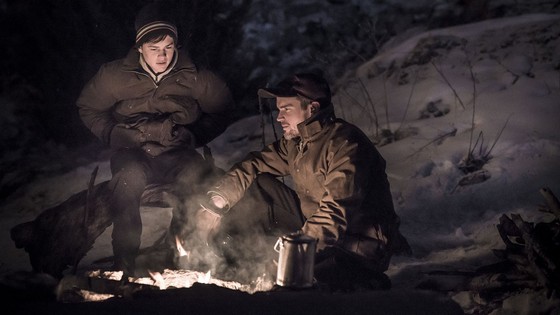 Based on the short story of the same name by acclaimed naturalist David Quammen, Walking Out tracks 14-year-old David’s (Josh Wiggins) annual visit to rural Montana. He’s there to visit his brooding, off-the-grid father, Cal (Matt Bomer). Cal plans the boy’s first big game hunt. But separated from the comforts of home, David is reluctant and resentful. As the pair ascends into the high country, Cal tries to connect with David by recounting the story of his own first kill. It was on his last hunting trip with his now long-dead father (Bill Pullman). A chance encounter however changes everything.

This is a slow-burn movie that takes some time to appreciate. I was uncomfortable for large tracts of it because it concerns hunting large game. I looked at the stately creatures and I found it heartbreaking to watch. Further, the way the father treats the son is also decidedly disconcerting. He’s harsh and he all but badgers his son into submission. But a change in that relationship forms a pivotal part of the movie. I grew to appreciate the unrestrained performance of Bomer and the wide-eyed innocence of his young charge, as played by Wiggins.

Very little happens for the first half hour or so. I thought here was much ado about nothing but then a single scene makes a world of difference. Suddenly, a greater urgency takes over and my interest was piqued.

The relationship between the father, Cal, and his own father, Clyde – revealed gradually via semi regular flashbacks – plays a significant part in proceedings. Cal’s error-riddled back-story provides a life lesson.

The snow-laden mountains are undoubtedly a feature of the film. Their dominating presence plays out like a character in its own right. They don’t follow anyone’s command. Todd McMullen’s images and the style of the picture reminded me of The Revenant.

Walking Out is a film for selective tastes – a tale about power and connection, survival and country.