A suspenseful horror film from director John Krasinski (best known for his work on the US version of The Office), A Quiet Place is also as scary as hell. Not since last year’s Don’t Breathe has the use of silence been such an effective and potent cinematic tool for creating edge of the seat tension.

A Quiet Place doesn’t waste any time on backstory. Instead it throws us straight into a post-apocalyptic world when much of humanity has been decimated by an alien invasion. A title card informs us it’s Day 89. It’s a world in ruins, and where silence is key to survival. There are corn fields and silos everywhere, but the main street stores are deserted and survivors are scarce. 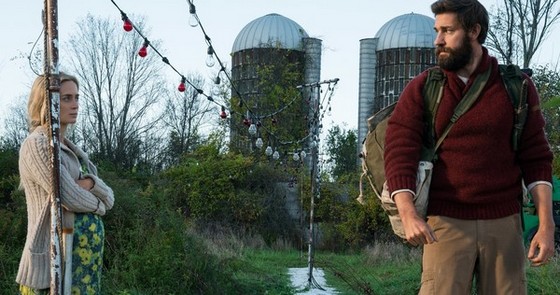 We meet the Abbott family as they forage through a deserted department store looking for medical supplies. They communicate largely via sign language and hand signals. Father Lee (Krasinski himself) and his wife Evelyn (played by Krasinski’s real-life wife Emily Blunt) creep silently through the store with their three children – Marcus (Noah Jupe), Regan (hearing impaired actress Millicent Simmonds), and Beau (Cade Woodward). This world is a dangerous place in which any sound can lead to tragedy. We only get a fleeting glimpse of the creature here, which builds a sense of dread.

The film then moves ahead another year, and the Abbotts have turned their farmhouse into a fortress with lots of soundproofing to ensure that they can live in relative peace. The Abbotts’ daily life on the farm is a dangerous proposition. Routine tasks such as eating, playing board games and hunting for food carry enormous risks. But there are few options. But Evelyn is now heavily pregnant, which will certainly lead to complications as the creatures seem drawn to their property. You clearly sense something bad is about to happen.

This is the third feature directed by Krasinski and is easily his most polished effort to date. He handles the material with restraint, and deftly builds up the claustrophobic suspense and ratchets up the sense of impending dread. The visual effects that create the creature are excellent and seamlessly incorporated into the live action.

Written by Krasinski, working from a script by Bryan Woods and Scott Beck (The Bride Wore Blood), the film explores the importance of communication in holding a family together, and the nature of sacrifice. There’s little in the way of dialogue, which somehow underscores the danger. Krasinski instead relies heavily on visual storytelling to convey the sense of the narrative.

Erik Audahl and team provide some effective sound design from which creates plenty of tension. It’s somewhat ironic to see a film produced by Michael Bay that dials the sound down! Marco Beltrami’s sparse score is also effective in heightening that mood of uneasiness.

Krasinski draws great performances from his small ensemble cast who have to convey emotions and ideas largely though facial expressions and gestures. Blunt brings some emotional depth and a sense of real fear to her performance as Evelyn. This is a change of pace for Krasinski, who’s better known for his comedic roles. But he’s good as a man desperately trying to hold his family together. Simmonds’ soundless performance is perfect, and she is the glue that holds the film together.

Leave your popcorn and other noisy distractions at the door for this one!