Can plants talk? Some scientific research suggests they are sentient. A humorous new work by Karla Livingstone-Pardy and Zachary Sheridan (who are the writers and directors) takes this concept quite a few fanciful steps further.

It concerns a young woman named Anne (Julia Kok) who was abandoned by her parents when she was a child in the 1950s. She had no friends and was bullied, but was utterly convinced her azaleas sang to her. That stopped when her parents walked out on her.

Now as an adult 20 years later, she and a fellow scientist, Randy (Isha Menon), are out to prove that plants can, in fact, communicate. They have potted plants in a lab – one hooked up to electrodes – but unfortunately these don’t respond to stimuli. The second scientist abandons Anne, who – too – is disheartened. And then everything changes … and how!

Before this is over, we learn about the respective personalities of a range of plants and how potting them was a misstep. More than that, the great divide between humans and shrubs is shredded. How joyous, but wait – there’s more. There’s intrigue – even murder!

I enjoyed this zany look at the world, which the cast tackled with gusto. Julia Kok is relatable in the lead role, Lucinda Ventimiglia empathetic as Little Cactus. Ibrahim Halaçoğlu is expressive as Cleve, who takes more than a passing interest in Anne, and is an equally wild child as Fern. Tessa Metcalf channels vengeful as Aloe Vera, while Isha Menon – complete with giant fake bushy moustache – has “me, me, me” down pat as self-centred Randy and doubles as Peace Lily. 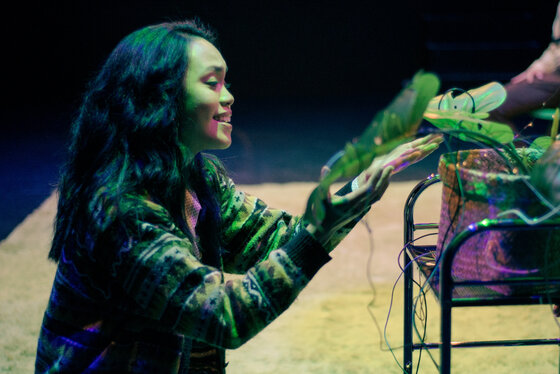 They work with creative, off-the-wall material. The story builds steadily, with a series of decidedly idiosyncratic moments. Members of the cast are even known to break out into song. Props are kept to a minimum, notably a couple of avocado-coloured rugs and various varieties of pot plants (naturally).

I highly commend the Theatre Works team for the way they have tackled the new restrictive normal in these COVID-19 times. They have constructed theatre in the round (well, oblong, actually), with 12 Perspex viewing areas a metre off the ground, each seating groups of 3-4 or 5-6 around a central stage area. These are decked out with elegant black furniture and faux tea-light candles. Very classy. A maximum of 48 patrons can attend productions in this format at Theatre Works until mid-year.

My only concern with Very Nice Pot Plants is that the Perspex acted as a sound barrier and when actors weren’t facing the audience, their verbiage became muffled and, at times, indistinguishable. I am assured this will be addressed with the addition of shotgun microphones in future productions. 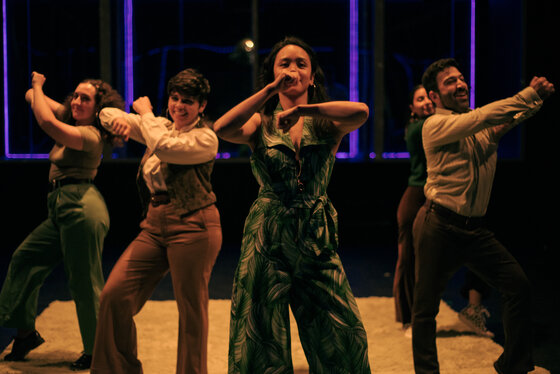 Regardless, with a running time of just under an hour, Very Nice Pot Plants to Purify the Air and Enrich Your Life put a smile on my dial. It is playing at Theatre Works until 24th January, 2021.