While the translation of films for the stage has become routine, screen-to-stage musicals can be troublesome, especially when the source material is not a musical in and of itself. In the case of Shrek The Musical, however, the stage show has everything that made the movie fun and then some. Through David Lindsay-Abaire’s book and lyrics, the musical represents a faithful retelling of the story immortalised in the 2001 animated comedy. 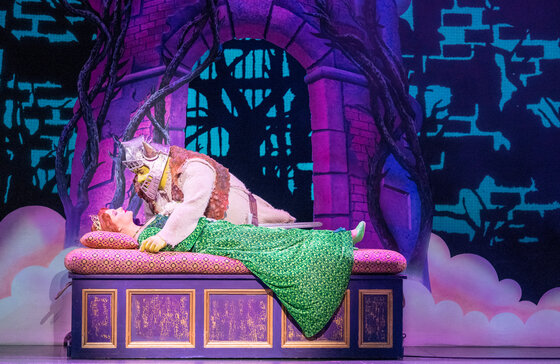 The twisted fairy tale opens with the parents of a young Shrek (Ben Mingay) singing ‘Big Bright Beautiful World’ in recognition of his seventh birthday, meaning that it is time for him to leave home to go and live on his own. As a result, we then meet the Scottish and grouchy green ogre Shrek, living alone in his swamp. He is happy to be hermitted away in a haven from the world’s fearful mocking. That is until a group of homeless fairy tale characters including Pinocchio (Caleb Vines) and the Three Little Pigs (Ross Chisari, Joshua Robson, Tom Sharah) seek swamp refuge from the persecution of the Napoleon-esque ruler of Duloc, the ruthless and cruel Lord Farquaad (Todd McKenney).

Shrek seeks out Farquaad and strikes up a deal: if Shrek can rescue the Princess Fiona (Lucy Durack), whom Farquaad wishes to marry for her crown, then Farquaad will ensure the return of Shrek’s swamp by returning the fairy tale creatures to their homes. So, along with his ‘noble steed’ sidekick Donkey (Nat Jobe), the unlikely hero travels to Princess Fiona’s prison, rescues her from a fire-breathing (and soon love-sick) dragon (Marcia Hines), and attempts to bring her back to the evil Lord Farquaad. 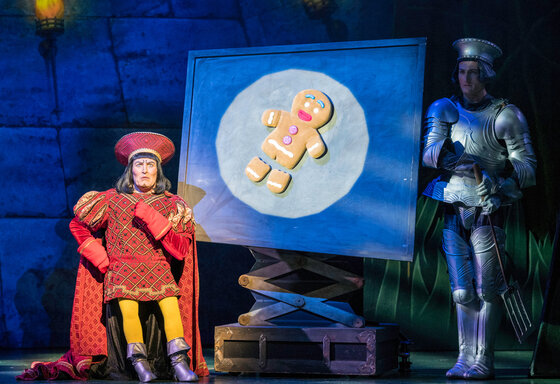 Whereas in the film we first meet Fiona as an adult, that changes in the musical, which sees her shown at three different stages of life. This is an effective addition as it not only gives audience character background and development, but some lovely harmonies as the Fionas join together for ‘I Know It’s Today’, exploring her frustration as she spends years waiting for her prince to arrive. Determined Fiona is clearly not your run-of-the-mill fairy tale princess and Lucy Durack soon shows this. She sparkles in a spirited performance. Ben Mingay, similarly, makes the eponymous Shrek a likeable and appropriately sympathetic character, more misunderstood than mean-spirited.

It is Todd Mckenney, however, who steals the show as Lord Farquaad, delivering a fabulous pantomime-esque realisation of Duloc’s evil dictator, determined to rid the world of fairytale characters. From the moment he first waddles onto stage, full of over-inflated self-importance, there is laughter. His fine-footed ‘What’s Up, Duloc?’ expression of love for his kingdom, accompanied by his cheerful army of Disneyland ‘It’s a Small World’-style Duloc Dancers, is an early highlight that settles the show into its sensibility. Comedy comes also from goofy Nat Job’s charisma and comic timing in delivering Donkey’s cutting one-liners.

Under Dave Skelton’s musical direction, the orchestra rises to the challenge of the show’s varied score of 19 songs. Mingay’s vocals are faultless in their revelation of a completely different side to the protagonist. Special guest Marcia Hines provides powerful vocals as the almighty dragon that ferociously guards Princess Fiona. Josh Prince’s choreography also impresses in Act II’s high energy opener ‘Morning Person’, which sees Lucy Durack leading a troupe of tap dancing rats in a fabulous Fosse-like routine, as Fiona sets about showing the Pied Piper how it is done.

The show is clever, particularly in its work around the character transformations within the plot. Also, just as the film made extensive use of cultural references especially to other Disney movies, in Shrek the Musical this is referenced by the inclusion of nods to popular musicals like Wicked, Les Miserables and Dreamgirls. There are also sprinkles of pop culture, Australian and even some uniquely-Queensland mentions to delight the audience. 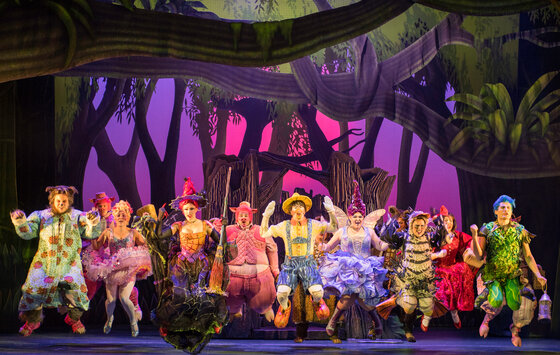 Adding much to the musical’s dynamism is the visual delight of Tim Hatley’s dazzling, detailed sets and intricate costumes. Whether in woods, swamplands or tall towers of probable Farquaat compensation, the imagery is striking and thoroughly theatrical. Indeed, Shrek The Musical delivers to those keen for green on many levels, with adventure, laugher, romance and razzamatazz. It captures what made its subversive fairy tale source material so beloved, in what is a well-crafted show, witty and also irreverently fun for adult and child believers alike.

Shrek the Musical is playing at QPAC, Brisbane until 7 February 2021