Fun, funny, light hearted, colourful and energetic, Shrek The Musical surprised me with its warmth, relatability and good natured banter. Of course, the 2001 Dreamworks Animation film starring Mike Myers, Eddie Murphy, Cameron Diaz and John Lithgow – upon which it is based, along with the 1990 book by William Steig – was a huge box office success.

The musical – with book and lyrics by David Lindsay-Abaire and music by Jeanine Tesori – follows the familiar plot, but with contemporary references (love that – it works a treat). An ogre with a giant roar is kicked out of home at age seven and finds refuge by himself in a swamp. At the same age, a princess (Fiona) is imprisoned in a castle tower – under the watchful eyes of a fire-breathing dragon – surrounded by lava fields. Now 20 years have passed and she is still there.

Suddenly, the ogre’s lair is overrun by a cacophony of fairy tale creatures who have been banished there by the self-centred and diminutive Lord Farquaad, who wants to be king. But in order to be the ruler, he must first find a queen. When he prizes information about the whereabouts of a princess (the same one imprisoned in the castle) from a tortured gingerbread man, he goes after his prize. Only, he doesn’t personally make the move. He engages the ogre to do it for him and by then the said ogre has been befriended by a pretty annoying donkey.

The princess – who has been counting the days until her rescue – has expectations of falling hard for her rescuer, who she imagines to be an admirable knight. Let’s just say she doesn’t get what she bargained for when a rather aloof ogre rocks up. Further, she is carrying a secret.

Big voiced Ben Mingay makes an immediate impression as Shrek – he has great stage presence. Lucy Durack is oh so wonderful as fiery redhead Princess Fiona. Her fits of pique are a particular highlight. I defy any actor to play Lord Farquaad better than Todd McKenney, who was born to play the part. He plays up to the audience magnificently and his delivery is impeccable. How his character is realised and moves about evokes much mirth.

Nat Jobe brings to life the “in your face” utterances of Donkey. The costumes are breathtaking and the actualisation of the large dragon by four puppeteers superb. Tim Hatley is responsible for set, costume and puppet design. The fairy tale characters, led by Pinocchio (Caleb Vines), are a hoot – none better than the gingerbread man. 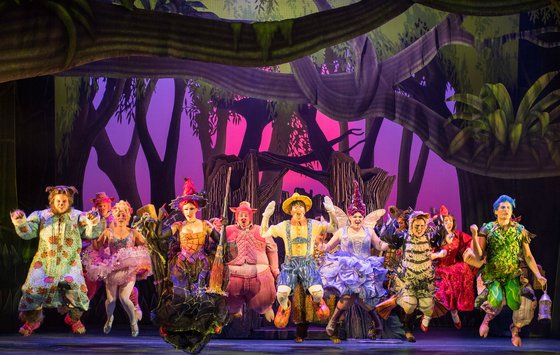 The show contains a series of delightful surprises – including tap dancing with a difference – with large dollops of humour. The 19 songs include several ear-pleasing chorus numbers. Shrek The Musical is a delicious treat for all ages. It is playing at Her Majesty’s Theatre until 12th April, 2020.